Mariticide - The Killing of One's Spouse

I was not the only person who had to apologise to my spouse this week. Iven was on his best form in bed the other night - snoring that is (minds out of the gutter). It was Wednesday night and I had to be up really early for my run. His nasal rales woke me at 1 am after only being asleep for two and a half hours and do you think I could go back to sleep?! When I was still lying awake at 3:30 I knew the chances of me running were slipping away and I think I had just drifted off when the alarm went at 4:50. I just turned it off and rolled over.

So I was a very unhappy little camper yesterday. I was tired and grumpy and I'd missed my run. So I decided that even though I rarely run in the evening I had to make an exception this time. Usually I'm cooking dinner but Iven owed me big time. He got to make dinner and I got to become a sane human being who was less likely to commit mariticide or filicide.

I decided I'd head to the uni and depending on how I was feeling (which was still pretty tired) I'd choose my course accordingly. Once I got going, though, it was hard to stop. It was warmish (Winter is becoming a memory) and clear and the sun was setting over the river. I had my favourite music playing in my left ear and all was right with the world - apart from my stupid left hip which was still giving me a little grief. Sixteen kilometers and an hour and a half later I turned up at home a different person to when I'd left. Aaaahhh!!

And today my demeanour was still good. It's great when there's a flow-on effect. I felt so good that I was inspired to bake! Yeah, I know - nothing new there. But today's creation was an homage to my dysfunctional relationship with my Mother-in-law. It's called The Nagging Mother-in-law. It's a lemon meringue cupcake with a lemon curd filling. Looks sweet from the outside but it may leave you with a sour taste in your mouth. 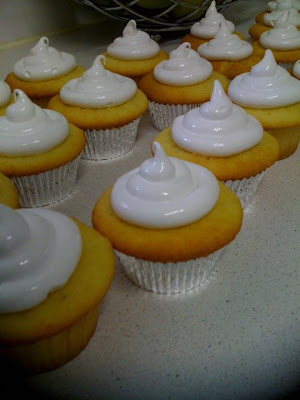 Actually my MIL has never nagged me but it made the cupcake inspiration more believable.
Posted by Char at 12:32 AM