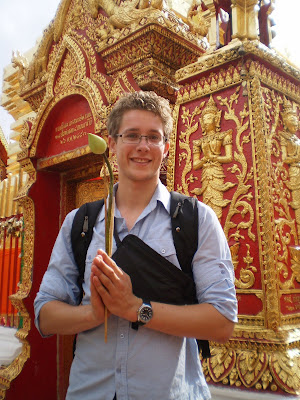 Regular readers to my blog will know what a tough year one of my sons has been having. Here's a reader's digest version - He broke up with his girlfriend of 3 years April '10. He had thought they'd be together forever but unfortunately she didn't think the same way and after totally destroying his self-esteem she went on her merry way. (A quick side-note - it's much better to just break things off cleanly than to hang on for months trying not to hurt the other's feelings but making them believe that if they IMPROVE themselves you'll be together forever.)

It was the last year of uni and things were pretty tough study-wise and having this happen on top almost destroyed him. He went to a very dark place and needed professional help to keep on top. BUT he made it through his final year and graduated with second class honours, ran a half marathon with me, went on a trip to Thailand to celebrate his graduation and got a job in his chosen field. He couldn't have done this without being on anti-depressants but there were some down-sides to the meds. He wasn't able to push himself the way he normally could and he made some impulsive decisions at times. And he still struggled with his self-esteem, especially when it came to starting his new job.

But things have been changing in the last month. Josh decided he was strong enough to do it on his own. He's been at his job for about 4 months and has settled in quite well so he went off the anti-depressants about 3 weeks ago. And even though I was worried that it may be too soon, Josh was absolutely right. He is strong enough to do it under his own steam. He is doing brilliantly - he's happier, he's focused, HE'S SINGING AROUND THE HOUSE! I've got my Josh back - not the shell who's been living here for the last year - the real Josh.

He's even taken up running. He's getting home from work and taking himself out for some long runs and that's just fantastic. His asthma is much more under control and those natural endorphins ... well, who needs prescribed meds when you can produce your own?

And as for me - his worry-wart mother - my cortisol levels have gone way down. I no longer dread his texts and I just know right deep down that he's turned a corner.