I know Australia's probably doing really well compared to a lot of economies around the world but you wouldn't have thought so if you were at the shopping centre I was at this morning. I've noticed more and more shops being boarded up - the previous tenants having to leave because they couldn't make the exorbitant rents. Little booths in the aisles have disappeared and at mid-morning in the middle of the week there's no problem getting a parking spot. Retail is suffering big-time.

A couple of weeks ago I had a little whinge about not being busy in my own business and I can see that I'm not alone. But there has been one section of my work that has been consistent through the year and I'd like to give a hearty thanks to all the bodybuilders and physique competitors who just HAVE to have a new bikini or two for nearly every competition. It is you people who are keeping the wolf from the door and keeping me from going insane from boredom. I'm eternally grateful to each of you fake-tanned, dieted-within-an-inch-of-your-life, flexed and posed athletes. 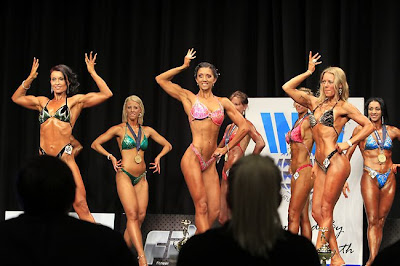 And on a totally different subject I'd just like to have a little whinge about being the only female in a house full of males. Just this morning one of my beautiful sons came into my bedroom where I was doing my hair, lifted his leg and farted loud and proud. Charming! But what was worse was the vibrations from the fart shook something out of the fly of his pyjama pants. Seriously, my mother didn't know how good she had it with only girls (and I'm discounting the 5 X PMS symptoms that she had to endure with 5 daughters) Come to think of it, maybe a fart and a flash isn't that bad - after all we both started the day with a laugh.
Posted by Char at 6:44 PM