I have a few gripes with the universe at the moment.

My hip is still playing up. I wanted to run this morning but knew I needed another rest day after speed. Not happy!

There are too many idiots on the road. In the past two weeks I've been almost taken out twice because of other people's incompetence. Old men - learn how to use roundabouts. It's not hard. Get into the lane that you need to get into and never try to turn left from the right hand lane across traffic that is going forward. And silly women - indicators are there to let other people know what you are doing. Don't use them then decide to drive straight ahead instead of turning right. It's not the first of April and I don't like people who try to trick others on the road.

People who audition for TV talent competitions who clearly have no talent, please take heed of what the universe is telling you. If your mother winces when she says you've got a lovely voice she's probably lying. If the family pets howl or leave the room when you sing, the reason may be because you are tone deaf and they are not. And Mothers who are tone deaf, there's probably a strong genetic link and your child will not be a musical genius - don't encourage them.

To all the fat slow people who saunter slowly down the aisles of shopping centres, I would like to say 'pick up the pace.' It's not bad enough that you're selfishly using more than your share of the world's resources - space, food, fabric and fuel (bigger people need bigger cars which use more petrol) - you don't have to get in the way of others who need to get stuff done in a normal time frame.

That's about all for the gripes this morning. I'm actually not in a bad mood - I've been feeling the love too.

And today I'm grateful that even though I have an injury my physio doesn't want me to rest up and hasn't banned me from running in Melbourne. I may have said this before but my physio is my best friend from high school so having to have treatment has meant being able to see her and have a chat every week. And she's had the dubious honour of massaging my hip and butt - bet she never dreamed she'd be doing that when we were back in high school.

Being Spring, I've really been enjoying all the beautiful scents on my morning runs - jasmine, mandarin and tangello blossom, mock orange, bauhinia. And that family of ducklings in the park - soooo cute!!

Because work has been slow I've given myself Friday off to have a day with Natalie (Saturday walking buddy and all around good friend). I'm heading to the Gold Coast early and we'll go for a walk and follow that up with breakfast and a movie. Sounds more fun than working!

All those road rage incidents inspired a brand new cupcake. 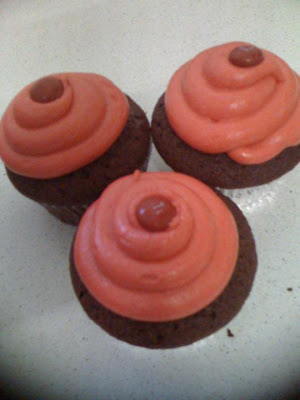 It's my Road Rage Cupcake - for when you see red. Red velvet cake filled with berry marscapone and topped with red vanilla buttercream and a red M&M. And yes, I've been made aware that it looks like a nipple. But that's not necessarily a bad thing - nipples can make even the most angry man a little distracted.

And on a final note - if you're having a bad day just consider the cockroach in this pic. He probably didn't think he's end up as a spider's lunch when he woke up. 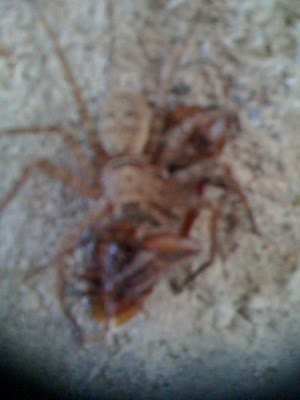