Here I am, plummeting headfirst towards fifty and I'm still learning. This week's been particularly educational and I'd like to share what I've learnt with you.

1. You'll never have your best runs when you've only had four hours sleep. No, there's not a newborn in our house (thank goodness) and I'm not having my previous 2am anxiety attacks (again, thank goodness). I just haven't been sleeping well and unfortunately I can't even blame Iven's snoring.

I had a shocker on Friday night. It was a mere three and a half hours before I had to get up and run. I didn't run very well - surprise, surprise! And that's after my awe-inspiring run on Thursday. That really did my head in for Sunday's run. I hummed and hawed about doing it and in the end lay in bed till it was quite late. Then I had breakfast - a sure sign that I've decided not to run. But that voice in my head tends to nag at me until I've done what I'd planned (and sometimes it can say really mean words) and I ended up heading out. My intention was to do a route I could cut short if I was feeling the blahs. It was after 9am, I had a full stomach and it was hot and humid and I was virtually setting myself up for failure BUT I had a really good run. I think that the 9 hours sleep I'd had the night before was the deciding factor.

I had another bad night's sleep last night. A whopping four hours! Today's speed session was not fun!

2. Giving up thirty minutes of your favourite TV program to help your son look for his nipple rings is never wasted time. I bet you weren't expecting that one! Yes, Josh has nipple piercings. Actually he only had one until a couple of weeks ago when he decided that the pierced nipple looked bigger than the other and he needed to balance them out. I think he was worried that he might end up with a huge-nipple-induced scoliosis. A new piercing needs pretty sparkly jewellery and his couldn't be found anywhere so I lent my super-power of finding the unfindable (all mothers have this super-power). Unfortunately we didn't find them. But we spent some quality time together. And the other day when I couldn't get my earring in, Josh came to my rescue.

3. Dogs have an uncanny ability to sniff out dickheads. I'm sorry about the language but after quite some time pondering a suitable synonym, I gave up. Toby was barking in the back yard today. Not hysterical barking, just the odd bark which said he was a unsettled. When I looked out the window I saw a workman in the back neighbour's yard. He took exception to Toby telling him that he wasn't welcome in our yard, yelled at him then took a swing at him with his shovel. I called Toby in and then 'had words' with the Neanderthal who doesn't understand that a bark is a lot different to barking  with hackles up and teeth bared. He told me that Toby had barked all day at him the other day - which was funny because I was at home working under the house and Toby was with me and we didn't hear a thing (actually I heard a bit of snoring from Toby who was asleep on the floor.) He'd barked once or twice at him earlier in the day but had lost interest. I suggested that next time he might like to pat Toby to befriend him rather than threaten him with a shovel. I don't know what he was afraid of - Toby wouldn't hurt a fly! And if it was the noise that was bothering him, tough! We had to listen to his dreadful taste in music and we didn't threaten his radio with a shovel. 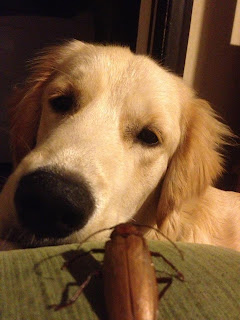 Toby might not hurt a fly but beetles are another thing all together.

4. If you try to teach a dog to bring an egg up from the chicken's pen you might end up with a lot of eggshell and a dog that now has a taste for raw eggs. Yes, Josh tried it and now Toby is a little egg-obsessed.

5. The cupcakes on Pinterest are evil and addictive. That's to make not to eat. I leave the eating up to my boys. I may have over-done it a little on the weekend. There's over 2 dozen cupcakes in my kitchen after a couple of days of eating. 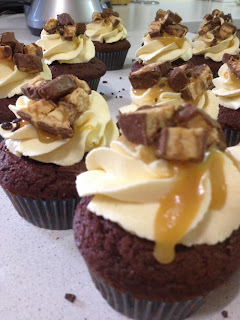 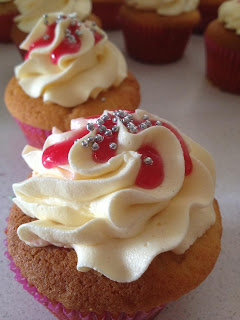 That's the total of my 'learnings' for the week. Has anyone else learnt something interesting that they'd like to share?