Just a quickie. I wasn't actually going to post today but events transpired which were hard for me not to share.

I went out for a run this morning. It was a pleasant enough 10k as far as 10k's go at the moment. There was sweat - running into my eyes, down my arms, legs and butt crack. There were Christmas greetings exchanged with Peter the Greek (he's a fixture on every one of my runs to the university). There were rowers on the river. Lots of cyclists cycling. And a Kookaburra in a gum tree (apologies to the writer of 12 Days Of Christmas).

This is a G-rated (mostly) blog so I've 'pixelated' the picture for your viewing comfort.

Josh had gone out the night before and was a little under the weather. My guess is that he'd gotten up to go to the toilet in the morning and then gotten confused about the direction of his bedroom - ending up on the couch.

But my philosophy as a mother is that it's every mother's duty to embarrass their child all the way through their life - to help build resilience. And I have a little streak of evil in my sense of humour. So it wasn't very long before a little plan was knocking on the front of my brain. All it required was a visit to the garden and a camera. 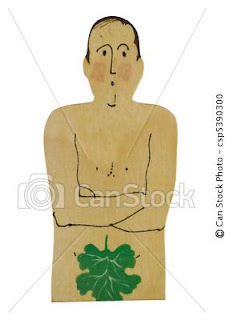 I don't have a fig tree but zucchini leaves are a similar shape - albeit a bit furrier. Position said leaf strategically and then take the incriminating photo.

Merry Christmas everyone.
Posted by Char at 10:48 PM