I know that a lot of you come here to find out about my latest achievements - to be impressed, amazed and astounded by what I can only describe as God's unfair bestowing of gifts on one person. So to satisfy this need in you, the less fortunate, I'd like to share a little story from Sunday.

Even though I don't run on Sundays, I don't like to do nothing so lately I've been harnessing up the beasts (AKA Toby and Bubbles) and taking them for a walk. We've come a long way from our first ménage a trois-style walk. There are still bursts of complete lunacy by Toby but they're usually over within the first kilometre. Once they get into a rhythm it all seems to settle down (until we see a duck, a magpie or a cockatoo within chasing distance and then it's every man for himself and I just hold on for the ride). 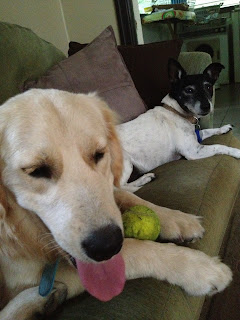 Unfortunately on Sunday I hadn't actually dealt with 'business' before we left home. This is a vital part of running preparation. There has been many a good run brought to a complete halt over the lack of preparatory emptying. But we were walking and I've managed without before so I thought we'd be good.

And while squatting on the side of the path is perfectly acceptable for my four-legged friends, it's generally frowned on for humans - except when we're doing the 500k relay where it's fine to cop a squat whenever nature calls.

Luckily help was close at hand in the form of the public toilets in a park that wasn't too far away. We walked with brisk determination towards them, clenched through the full cycle of traffic light changes then finally made it to our safe haven.

Toby was more than happy to join me in the cubicle but Bubbles was a lot more reluctant. Probably with good cause! She pulled backwards and no amount of coaxing would entice her in. But reluctance is easy to overcome when you're only 4 kilos. I just picked her up and locked the door.

It's not so easy being precariously perched on the porcelain when you've got two dogs that want to escape to freedom by crawling under the door, attached to your wrist. And it's even harder trying to pull up sweaty shorts one-handed. The draw-string was totally out of the question.

And what was so amazing about this, you ask. The amazing part is that I managed to complete a toilet visit with a difficulty rating of 8.8 in under 3 minutes. It can take my husband the entire duration of blow-drying my hair (a good 7 minutes) to complete a bog-standard visit.


***
While we're on the subject of exercise shorts I'd like to find out if anyone shares my irrational fear.

The shorts that I've bought this year have all got in-built undies. In the past I've just cut these out and worn my own but it seems like such a waste that I've been wearing them as I bought them. The first time I wore them with my own undies under the built-ins but this seemed to be paranoid in the extreme so I've been going commando - if you can call wearing just one pair of undies instead of two commando.

My problem though is that now I fear a complete and catastrophic wardrobe malfunction. That somehow my shorts will just fall off as I run along or I will be dacked by a random passer-by. And that I'll be left running bare-assed through the centre of Brisbane.

I have no reason for this fear. My shorts have never once fallen down. No stranger has ever tried to dack me. And yet, whenever I get ready for my run the thought is there. I guess that's why it's called irrational.

So am I alone in this?