It's started already. People have begun to ask the question that scares the bejeezes out of me.

I've had a fear of this question ever since I was a lot younger. The thing is that there's no 'right' answer. And I like to be right. And I have a bit of a phobia about asking for something/anything because I may be seen as greedy (something drummed into me as a young child). And I honestly don't need for anything. And I hate window shopping so I don't know if there's anything out there that I would just frivolously like (except another puppy because they're just so cute and so much fun!)

I'll admit it. I'm a nightmare to shop for.

If I was a little more altruistic I would ask people to donate money to a worthy cause. But I kinda want something material. And that makes me feel greedy.

So if anyone has any great ideas PLEASE put them in the comments and then I can just tell my nearest and dearest to read my blog and take special note of certain comments. Thank you in advance because I just know all you lovely people are full of brilliant ideas.

My answering machine broke. I'd like to blame faulty manufacturing and poor design BUT in my heart of hearts I think that it's probably because I've dropped it just one too many times. My cleaning lady told me that some strange man kept answering the phone but whenever I pressed the OGM (out-going message not a dyslexic Oh my God) button all I could hear was my husky, sexy voice (yep, Aussie strine has a certain allure) stammering over an invitation to leave a message. And not many people were actually leaving a message.

So I decided to check for myself exactly what was happening and if, in my absence, my phone became possessed by a well spoken Englishman. Years ago this would have been a tricky exercise. I would have had to go to someone else's house and give them twenty cents to use their phone. Or I could have done what I did once (or twice), rung my number from my own phone to find it engaged. Go figure!!

Now it's just a matter of remembering where I left my mobile and then trying to remember the home number before giving up in disgust and looking in my contacts and finally calling home.

I found out Evelyn (the cleaning lady) was right. There was a very imperious Englishman giving a very dismissive message to all my customers. I wasn't available to take calls. There was no offer to take a message for me and it's not like he'd have to search for pen and paper - there's always one right next to the phone. It sounded like I was just way too busy and way too important to lower myself to come to the phone.

So my solution? I turned the machine off. And I haven't quite got around to buying a new one. And it's three weeks into the new work year. Oops!

The problem is that I'm a little ambivalent about work. Sure I like it enough but I just don't want to get as busy as I did last year. I don't want to work weekends and public holidays. I'm just happy to do about five hours a day and leave it at that. So my warped, twisted brain has decided that if someone rings and can't get me they might not ring back. And if they do ring back it means that they are really keen. Which might mean that they're happy to pay a premium for my quality workmanship. Resulting in no loss of income, just a reduction in working hours. Win-win!

It was cleaning day today and when I got home from the grocery shopping Evelyn reported to me that my answering machine wasn't working (because it was switched off). Someone had tried over and over to ring. But because I hadn't answered, they'd decided to just drive on over and talk to me in person. I love the logic there. Of course the reason that I wasn't answering the phone was because I was on the toilet, hard of hearing, elbow-deep in laundry, or simply unable to get to it in ten rings. Apparently they were shocked that I wasn't home.

Sometimes I fear that common sense is becoming extinct.

And talking about common sense, I'd really like to know where the common sense is in my push up challenge program?! Two weeks ago I maxed out at 15 push ups. There was nothing more in my wobbly, weak muscles. Today's program had me doing reps of 16, 17, 14, 14 and 20. Eighty one in total! This is ridiculously fast progression. Three of my sets were over my max from when I started.

There were some ugly push ups towards the end and a lot of grunting. Toby became quite concerned at one point and trying to do a push up when you've got this ... 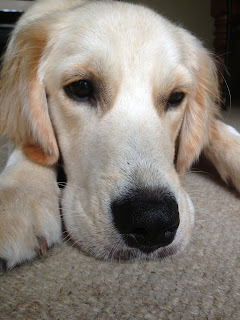 ... just a few inches from your face it's hard to channel your mean, hard-core man woman of steel. That face just melts me!

I'll admit right now that I'm a little bit scared of what's in store next week. I may have to lock Toby out of the room in future to get them done.
Posted by Char at 5:09 PM