I haven't had to call anyone a fatuous nincompoop in over 24 hours. You know what that means don't you? It means that I finally got out and ran. In the pouring rain. It was so wet that after a while I didn't even bother trying to run around the puddles because they were getting too big, my shoes were already a bit wet AND I couldn't actually see them because my glasses were splattered. It wasn't my most favourite run ever but it did get rid of all that cranky that had been festering in my little black heart. I'm now a much nicer person ... for the moment.

I'm also a wonky person. Just ask my physio. Nothing is quite working the way it's supposed to and the end result is the hip pain that I'd been having. After two weeks of doing my exercises religiously I went back to boast about my progress. Yes, I've made slight improvements but I still run kinda funny. Knees together. Feet flicking out. Hips rocking. That's why I've never wanted to buy a finishing line video. Who wants to spend money on watching yourself run like ... actually, there's absolutely nothing I can compare my running style to. No wonder people know it's me running from a distance. My style is truly distinctive and unique.

I totally blame the fact that I wasn't allowed to learn ballet as a child. If I'd learnt ballet I might have been more comfortable with turning my toes out a little. I might have actually developed some core strength and some glutes. You need glutes for those leaps don't you? 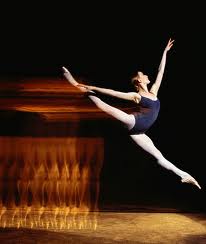 And if I'd learnt how to jete like that I might have had a decent shot in keeping my shoes a little drier yesterday.

But I didn't learn ballet. I learnt how to play the piano so instead I learnt how to hold a slump position for the good fifteen minutes that I would practice under duress when I was younger building up to at least an hour of slumping once I got to play pieces that I actually enjoyed. I also developed highly tuned hip flexors from all that sitting and pedal pressing. Hip flexors which are still as tight and inflexible today from hours more spent at a sewing machine slumping and pedal pressing and running incorrectly.

When you've been moving the wrong way for fifty years it's a little bit hard to change. New movement patterns feel weird. Physio Chris (as opposed to Coach Chris) has given me a new exercise to help my muscles get used to working. I've got to tie my legs together bondage-style then pretend that I've been riding a horse for at least a week and am a little saddle sore. Knees apart!

The aim is to keep my knees under my hips rather than directly under my mid-line. It feels weird, wrong and a little naughty. After all, I'm a lady and a lady keeps her knees together.

Stop laughing!  Just because I talk about farting (and have known to do it on the very rare occasion) and sometimes have to unblock the toilet with a piece of wire and a plunger and call people fatuous nincompoops (but only when they deserve it) and yell at the TV when the ref makes a bad call and give Coach Chris the finger when he gives me grief doesn't mean I'm not a lady. I can be a lady if I want to. I just reserve the right to choose when I am one.

I'm thinking of wearing a long skirt when I do the shopping tomorrow and bringing along my tubing for an extended workout around the aisles of Woolworths. I'm sure no one will notice me walking strangely.


But on second thoughts I don't want to be stopped on suspicion of shoplifting a turkey.