I have a very bad case of Ear Worm.

Luckily it's nothing like other types of worms that can infect humans. You're welcome to post comments of disgust about this photo - I know it'll gross a lot of you out. I happen to find it in the fascinating but very disturbing category - a lot like the photos that we used to pour over in my older sister's nursing textbooks. (Try looking up genital warts while you're eating breakfast.) 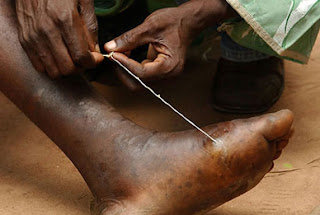 Ear worms are something that probably everyone has experienced at one time or another. They're the little bits of songs that implant themselves in your brain on perpetual loop. And they can drive you insane!

It happens to me a lot when I run. The first time I really remember it happening was my first half marathon when Tina Arena sang Sorrento Moon over and over for two hours. And it wasn't even the whole song - it was only 16 bars because that's all the words that I knew. The day after the half marathon I went out and bought the CD just so I could learn the rest of the song.

Since then it's happened too many times to count and if I'm running solo I'll almost always run with music so at least I'll get some variety in my tunes, to say nothing of the quality of voice. Even my in-head voice isn't that great.

I rarely use music when I'm running in a group. Mostly because I like to be a little social and also because my hearing isn't as good as it used to be and trying to listen to someone talking over the sound of my heavy breathing AND music ... well let's just say that sometimes I hope that my smile and nod are appropriate.

Tuesday mornings are always speed sessions so I never take my MP3 and for the last few weeks I've had the re-emergence of the dreaded Ear Worm. It's usually the last song that I heard on the radio before I got out of the car.

Little Talks by Of Monsters and Men ended up being quite a good tempo for me to run to and I managed to get pretty even pacing that week. The next week it was Call Me Maybe and the fact that I kept changing the lyrics to Call Me Crazy may have been a commentary on how I was feeling at that moment. But again, the tempo was really good at keeping me on pace.

This week I didn't have my car to take to speed. Josh was kind enough to lend me his. But Josh is really into music and has a pretty good system in his car (complete with some pretty powerful sub woofers that give us a heads up that he's on his way home when he turns into our street. His stereo system was not meant to be used by the mothers of the world. Hi-tech? Absolutely! Too many buttons and knobs. And all those pretty lights just confuse me. All I could manage was the volume control - choice of music was totally beyond me.

So yesterday I drove to speed with the soft strains of gangsta music (he'll disagree about my categorisation but I call any music which describes women in pretty derogatory terms as gangsta) dub-dubbing in my brain. I'm pretty sure I had the cool head-nod-thingy happening too. But my opinion of cool is often reclassified as embarrassing and dorky by my progeny.

I got out of the car convinced that my run was going to be smattered with lyrics that included 'bitches' and 'ho's'. I was tempted to turn my running cap around backwards so I'd look as hard-core as the music that was happening in my head. But it was raining and I didn't want my glasses to get wet - you kinda lose that hard-core edge when you trip over because you can't see.

We started running and once I got into a rhythm the music began. No bitches or ho's thankfully. My Ear Worm decided that a little Alicia Keys would be nice - but sung by the cast of Glee (who I have in miniature in my brain apparently). Why I was singing about New York is anyone's guess. But I can tell you it's easier to run fast without having to bob your head every second step.