Hip, Hip Hooray and a Winner

There are inherent dangers in ramping up the mileage quickly after you've been forced into what feels like semi-retirement.

My long-term readers are quite aware of the struggles I've had with my health (unexplained fatigue and loss of all my running super-powers) over the last couple of years. And the eureka moment when I finally got a diagnosis (very low testosterone levels due to my age and the use of a contraceptive pill). And my improvement over the last couple of months of treatment (yay for performance and life-enhancing drugs).

Feeling normal again after feeling so awful for so long has been a heady experience and I've grasped my new-found energy with both hands and started to flog my body the way I used to be able to without thinking twice about it. But I've been a little too over-enthusiastic it seems. Especially since my body lost quite a lot of muscle tone and strength from my ordeal. Apparently good muscle tone and strength is one of the requirements for happy, injury-free running. Who'd have thought?!!

I was losing a battle with an annoying hip issue. It didn't hurt while I was running but as the day went on and I tightened up, it would start to remind me exactly how far I'd run that day. Sometimes it would wake me up at 3 am and tell me to stretch. Believe me, those 3 am wake up calls are not my favourite. I've done my penance as a mother of three and should never have to get up at that time again.

So I decided to do the only sensible thing I could - ring my high school BFF who, as fortune has it, is an awesome physiotherapist and get her to give my hip a stern talking-to. She gave me an examination then made me run through some of the strengthening exercises I'd been doing. I'd been doing them wrong!!

Turns out my mother was wrong when she told me that a lady should keep her knees together. That rule does apply in certain circumstances like when you're sitting on stage wearing a really short skirt or when you're getting out of a car in said short skirt sans panties. In those two situations the knees-together rule is definitely a rule to live by. But when you're a runner whose healthy pink glow comes from exertion and not blusher, when you wear short shorts rather than skirts for the most part - it's knees apart all the way.

I'm having to retrain my movement patterns to keep my knees more in line with my hips. And it's HARD to change almost 50 years of conditioning.

I have only two exercises to do, a one legged squat and a reverse plank with a knee lift, and they're mentally exhausting. Also my tongue gets quite a workout. If I don't hold it exactly the right way I have absolutely no chance of doing the exercise right. It's hard to teach this old dog new tricks. But I'm stubborn enough to not allow it to beat me.

There has been a marked improvement in my hip discomfort already and it's only been two days. Yay! And there's been a definite improvement in my motivation to keep my piano dusted. Can't see the link? It's because the piano is a highly polished and reflective surface and acts like a mirror so I can check if I'm doing the exercise correctly. Obviously!!

The third benefit of having the minor issue is that I get to catch up with Chris (the physio, not the coach this time). We have a re-visit next Wednesday and have included enough time to have a coffee and gossip. And she hasn't told me to stop running. Having injuries isn't all bad.

I've drawn the winner of the Personal Planner giveaway. I wanted to make the drawing totally transparent and enlisted the help of my favourite canine (mostly because he can't read and therefore can't be accused of favouritism).

Each of the entrant's names were inscribed on a pig's ear to ensure the cooperation of said canine. Needless to say he was very enthusiastic, helpful and drooly. 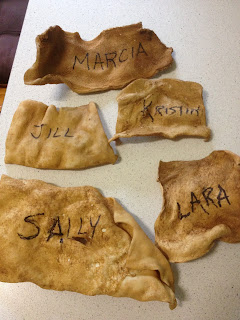 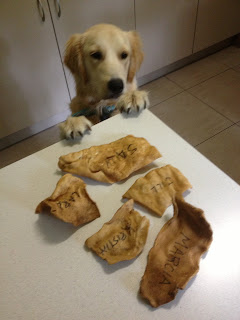 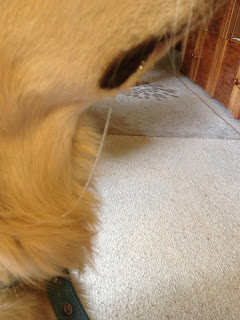 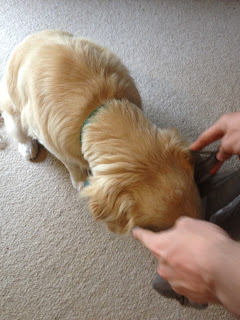 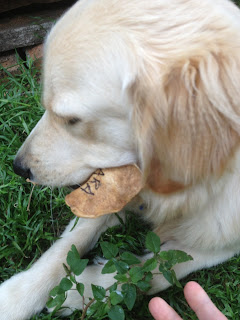 And the winner is Lara from Princess Goddess Mommy. Well done Lara. You tasted delicious and made his bowels move (Aren't you glad I didn't photograph that?!) Can you send me your email address and I'll organise for the gift voucher to be emailed out to you.