It's been a trying week. One might say it's been insanely, crazy busy.

All that I've wanted to do is run and breakfast with friends and read and nap. But what I've HAD to do is inconvenient, non-fun things like WORK. And I've found that my desire to do all the fun stuff increases exponentially as my level of work-franticness increases.

This week my level of work-franticness was at an all time high. There was lots of stuff that had to be cut out and sent to the machinist by the end of Wednesday. I'd known that this week was going to be bad for a while but I hadn't factored in the possibility of having a husband with only one functional arm. I'd relied on having a fully functional spouse that could take over the daily hiccups like dinner and folding the washing and walking the dog. But because of the angle grinder incident, what I had was a couple of other jobs on my plate. 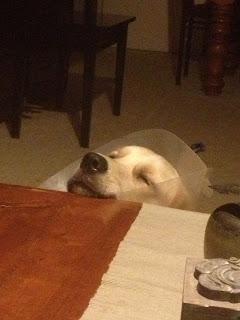 "You think YOU have it tough. Try wearing a bucket on your head"

So I had to do what I hate having to do - ask people to help. The boys were good about doing what they could around their commitments. Josh took stuff up to the hospital. Luke picked Iven up when he was discharged. Sam did some extra stuff around the house. Mum took Iven to his therapy appointment on Wednesday.

This all took the load off but I still had more work than I'd banked on. And I was feeling stressed like I wasn't getting it right. I should have been the one to pick him up, to sit with him before surgery and be there when he woke up, to bring him home and make sure he was being looked after and take him back to his appointments. But my insightful youngest son gave me permission to ask for help and to lean on family and I really appreciated being allowed to rescind some of the responsibility.

That's the problem with running your own business. There is no one else to take the reins when the s@!t hits the fan. And you're left in the position when you have to decide who to let down - family or clients. Luckily family was able to cover me but I can foresee times when it'll be the client that loses out.

The stress must have been a bit obvious to those who know me best. Coach Chris has rung every day to check on things. And by checking on things I mean he's checking to see that I haven't done anything untoward to my husband. And by untoward I mean mariticide. I don't know why he'd think I'd do anything violent to my husband. Just because I talk about it and write about it doesn't mean that I'd actually follow through. Planning murder is much less messy than following through with one. And I had enough to do this week without having to come up with the perfect murder, commit it and then make sure that there was absolutely no evidence that could point to me.

Coach Chris was also so concerned about my husband and the chance that he might be neglected that he offered to give him a bell so I could be summoned whenever he felt need of food, drink or amusement. I graciously declined his offer and when he insisted that it was a good idea I became a lot less gracious. Apparently 'where the sun doesn't shine' can be taken quite personally and all I'd really intended was burial by canine in the back yard.

So what did I do to manage the stress, you ask? I did what I always do. I ran away from it. Literally. And it felt so good that I didn't want to stop yesterday. So I stretched it out as long as I could justify and still get everything done that had to get done.