You Can't Keep a Good Man Down

Apparently my husband must be a good man because I'm having trouble keeping him down.

The problem is that he's not sick, just injured. And in his injured state it's quite easy to see all the jobs that need doing around the house and be a bit frustrated that he can't get to them. After all he has a couple of weeks off work (because he is injured from trying to do jobs around the house - the irony seems to escape him).

But rather than suffer through the frustration and just let them stay undone, he's been trying to tackle them one-handed. And this terrifies me because he managed to damage himself enough to require surgery when he had two good hands.

Last Friday I was working away downstairs when I heard a loud banging come from above. A loud banging over my head is not a usual occurrence so I HAD to go investigate. I found Iven sitting on the top step of our patio with a hammer and chisel trying to chip out a cracked tile. And yes, he was using his recently-sewn-up-still-in-a-cast hand to stabilise the chisel while he hits it with the hammer in his left hand. He is not left handed. He is not ambidextrous. He IS an accident waiting to happen.

Then Saturday he decided that he should try to finish the job that started all this drama. He's trying to move a gate at the side of our house to have easier access to a shed where the boys are supposed to store their bikes but don't because they have to open a gate. The gate was welded to a post and he was using the angle grinder to cut it off. This week the angle grinder is definitely verboten so he tried the hacksaw instead. But the hacksaw wasn't working so well so he ended up with a crowbar. Yes, it's absolutely a great idea to use a crowbar one handed with only your leg to help stabilise it.

Sunday, having been successful with removing the gate, it was time to weld something to something (I think it was hinge to a post but not exactly sure because my policy now is to stick my head in the sand and hope that it will all go away). Starting to freak out about a one-handed man in charge of what could be considered a flame thrower. Thank heavens #3 son, Luke decided that it was a good day to learn how to weld. 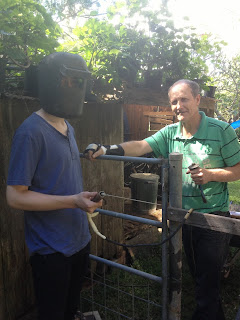 Luke, I am your Father. Now give me my mask back.

Even Toby is feeling the stress. Some of you commented on Toby's cone of shame in his last photo. He's been chewing on his leg and I swear it's because he's worried about Iven. Or it could be that he doesn't want Iven to get all the attention. 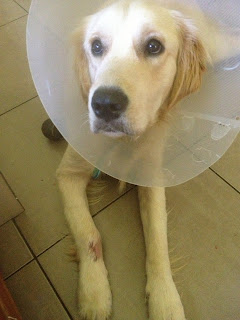 I've just been reading up on tendon repairs and basically it takes about six weeks to heal. And you're not supposed to do anything with the affected area until you have your surgeon's okay. And 2 out of 50 surgeries end up with complications because the patient DOESN'T DO WHAT THEY'RE TOLD. I'm now taking bets on whether Iven will be one of that 4%. But the odds are really short.

I haven't spent the whole weekend just following around Iven with a first aid kit and popping tranquillizers. I've also done lots of fun stuff. Like doing a couple of loads of washing. Like killing an ant colony that was trying to take over our house one cupboard at a time. Like cutting the hair that grows between the pads on Toby's paws which make him slip all over the kitchen tiles. Like sorting out all the books under my bed into 'read' and 'unread' piles and then trying to find spaces in our bookshelves for the 'read' ones.

I also finally got around to writing things into my diary - important things like races, hen's nights, weddings and 50th birthday parties. And that's when I realised that my system of not writing things into my diary and assuming that I was free every weekend just didn't work so well. It usually works fine because I basically have no social life apart from running, races and breakfasts with running friends. And last year, because I was too unwell to do many events it mattered even less. Now I'm feeling a lot better and running a lot better I've let my hair down a bit and entered quite a few races - including one in Sydney in May on just the weekend of my BIL's 50th birthday party. The same party that I'd bought the gorgeous (and fairly expensive) dress for last weekend. Oops.

And while I'm sorry that I won't be able to celebrate a significant event in Mike's life, I'm a tiny bit devastated that I don't get to wear the gorgeous dress - at least for a little while. So I did what any good blogger would do. I got all dressed up (with no place to go) just so my dress could have a virtual outing. (Note the strapping tape around my ankles - it's what every stylish runner is wearing this season). 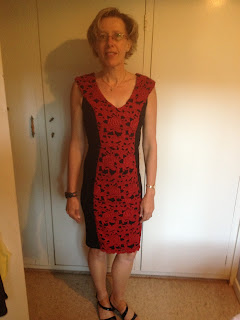 The silver lining is that I now have enough dresses to wear a different one for each of my sons' weddings. All I have to do is convince them to get married just so I can wear them.
Posted by Char at 12:33 AM