First race of the year yesterday.

I thought for my first race I'd take things a little easy and just sign up for the shortest distance - 4.5k. It's a strange distance but it pretty much guarantees me a PB because I've never run it before. And there was some definite advantages to running the short one. It started first so I had less time in the morning to over-think things. And my Luke, my youngest, and Becky, his girlfriend were going to be running it as their first ever fun run so I'd have people to line up with.

As it turned out I had plenty of time to over-think things. I'd been woken up around 3am and never managed to get back to sleep. My stupid nervous stomach kicked in even before I was fully awake and I had lots of time to work on breathing techniques to manage anxiety and arguing with my worried self in my head. By 5:30 I gave up and started to get ready and had been successful enough with my self-talk and breathing to be able to eat a banana without bringing it straight back up. Life is filled with little wins like this.

The upside about pre-race nerves is the total cleansing effect it has. After my second toilet visit I knew I'd be running without fear of any unexpected bush diving. But the downside of pre-race nerves is the ability of your body to produce three litres of urine from 200ml of water. And this meant that there were two more toilet visits before we could finally stand on the start line.

We managed to get a really good position fairly close to the start and we waited with thousands of others huddling together as the heavens opened on us just enough to make us want to huddle closer. The rainbow behind us was almost compensation for getting a little bedraggled and shivering and having the starting arch collapse gave us all a laugh and helped get rid of a few jitters. And then it was just wait till the hooter sounded.

The start of the course was congested and winding. It was hard to move around the runners who had started way too close to the line for their ability. I tried to take it easy and not dodge and weave so much that I got tired but some dodging and weaving was necessary. I got to a point where I was breathing heavier than I thought I should and then my Garmin beeped for the first kilometre - 4:20. No wonder I was breathing heavily. Time to back off the pace a bit or burn out.

The course was pretty flat and on wide roads so after the first k it was easy to just settle into a pace - moderately hard was the goal and my other goal was to NOT look at my Garmin except when it beeped. I wanted to run by feel.

The second beep happened just before we hit the park, which was the turning point. 4:50. That was more like it. I wanted to run at under 5 minute pace - so far, so good. I was also enjoying watching all the kids racing. There were tons of primary school aged kids and tons of them were ahead of me. Fun runs keep you humble.

The third beep had me at 4:43 and I was pretty happy with that. I knew there wasn't too far to go and I should be able to maintain that pace. In the back of my mind, though, I was a little worried that the first k had been too fast and it might come back and bite me or that the tunnel that we'd gone through at the beginning had made that reading inaccurate and I had longer to run than I thought. There were no kilometre markings that I'd seen apart from a 6k one for the longer run.

Kilometre four had me at 4:48 and I was feeling great knowing that there was less than a kilometre to go. I still wasn't convinced that it was only 500m so I kept a little in reserve just in case. We had to run back through the first tunnel to the starting area and it was here that I saw the finish chute - way sooner than I was expecting. And I had enough in the tank to put down the pedal and finish in style. I passed one man (and we all know how much I love beating men) and pulled right to the shoulder of a boy who looked to be about ten. I knew that I could pass him but the mother in me just couldn't bear to so close to the finish line. I backed off a bit and let him finish just ahead.

I stopped my watch at 21:36 - 4:38 pace. Better than I'd hoped for - especially after a week of heavy training. And today I've checked the results on-line and I've ended up with third in my age group. So far I'm loving that I've turned fifty.

I waited a bit to see Luke and Becky come out of the finishers area. They'd had a great first event. They'd stuck together, run the whole way and finished just under 25:30. All three of us were high on adrenalin and endorphins. Becky went off to have Mother's Day breakfast with her family and Luke came back with me to watch my squad-mates cross the line.

We found Coach Chris right on the finish line and I took this pic of them. 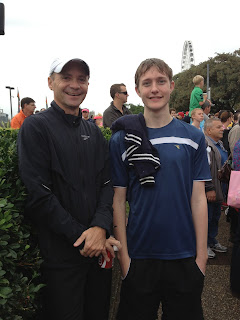 And this was the bottom half - 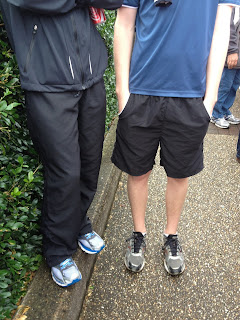 Yes, my baby is TALL!

Then it was home to get hugs from my other boys and off to breakfast. Then a couple of hours of baking and afternoon tea with my Mum.

Yes, I had a lovely Mother's Day