The Week in Review - The Highlights Reel

After my last post it was so great to hear how many of you also suffer from pre-race jitters. Strangely it helps knowing that it's really quite normal (as far as people who choose to wake up pre-dawn and run 20k on a regular basis can be - it's all relative) and if it's not normal at least there are plenty of others who are just as crazy as I am.

The other thing that's helped with my nervous jitters this week is having the pressure taken off at work. Now that I'm on top of that area of my life I'm feeling much better about everything.

Other things that are improving are Toby's neck 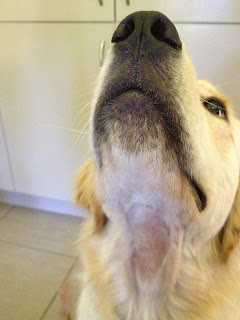 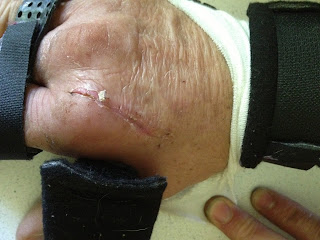 Isn't that needlework quite spectacular? It's got to be one of the neatest scars I've seen. Recovery of full movement is slow, as the occupational therapist had warned us. Iven still can't point so he's having to use his words when asking me to get stuff for him.

It's healed enough, though, for him to go back to work next week (HOORAY!!!! Cue the brass band and the fireworks). The problem lies in how he's going to get there. He can't ride his bike yet and wasn't allowed to drive the car to start with and I can tell you right now that I won't be happy having to drive him there and back every day (although having the house to myself might be worth paying that price) so his job (his one and only job) last time he saw the occupational therapist was to ask her if he was allowed to drive yet.

So on the drive home, I drove just using my left hand and the palm of my right just to make sure it could be done. It can be. And as Iven's in-house vet (a vet's pretty much a doctor isn't it?) I have deemed it safe for him to drive to and from work and on any errands that I find necessary - like buying me my favourite takeaway Vietnamese salad and picking up those few groceries that I need for the cupcakes that I decided to bake on a whim.

Did you catch that? I baked on a whim - not because I had to. And I even made up a new recipe. It was inspired by these - 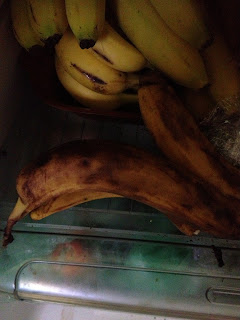 Manky bananas can be quite inspirational. As can an empty cupcake container. Banana cupcakes don't really cut it with my sons who prefer chocolate with everything (I have taught them well) so the idea was to create a banana chocolate cupcake with brownie-like moistness. It's not too decadent to add a whole block of melted chocolate is it? 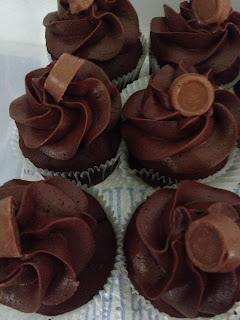 The icing is particularly yummy being that it's made entirely of butter (beaten for ten minutes), cream, cocoa and icing sugar. And I may or may not have sucked the leftovers directly from the piping bag.(thank goodness I had a 20k scheduled this morning so I could run off the guilt - if I did feel guilty because it may not have happened at all)  Unlike SOME people I don't have to break into cupcake shops to get my fix of sugar and fat.

Mentioning today's 20k allows me to segue neatly into some gratuitous back-patting. Today's 20k ended up being 21.1k (Okay, you broke me. I DID suck the icing straight out of the piping bag and that extra 1.1k probably worked all those delicious calories off. I hope.) and I ran it in 1:57. Sure, it's not a world class time but considering I ran the half in Melbourne in October last year and my time was 2:00:12, I'm secretly (probably not so secretly if I'm writing it on my blog) thrilled. I felt really good for the run and managed three sub-five min. k's when I hit the Park Run people again. I can't tell you how satisfying it was to pass dozens of them, while thinking to myself that I'd already run 16k.

And finally I'd like to finish by sharing my new favourite picture taken by Josh's girlfriend, Serena. 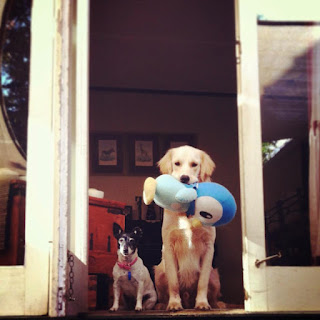 That's the welcome you'll get if you ever come visit.
Posted by Char at 8:04 PM