I've got another race in a week's time. That makes three races in four weeks. What was I thinking?

It's only a 5k race and it was supposed to be my second of the year - until I had a rush of blood to the head and decided that a half marathon interstate was an awesome idea. And it was, despite all the anxiety in the week leading up to it.

I have no doubt that I might get a little wobbly next Sunday morning too. So why do I enter races if they make me nervous?

There's something incredibly character building about racing. For me it's in the realm of "do one thing every day that scares you" - thanks Eleanor Roosevelt for taking me out of my comfort zone. 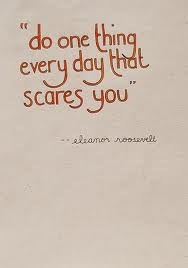 Racing makes you work hard towards a goal. Focus on one point in time. And makes you muster all your energies and mental strength at that particular point in time to achieve a goal. The goal may be simply to finish, or to run the entire way or it may be to reach a certain time. It really doesn't matter - just having a goal is the scary bit because it makes you aware that failure is a definite possibility.

Most of us don't like to fail. But putting ourselves in a position where we can fail makes the achieving of the goal so much more special. Nothing beats the high that running a PB give you. 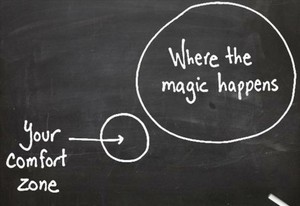 Racing helps you train with purpose. Each workout has a reason - to build speed or leg strength or endurance. Or maybe it's to increase your lactate threshold so you can hold a faster speed for a longer period of time. It's harder to blow off a training session because it's raining or cold or you just can't be bothered when you know you've got a race coming up.

But the biggest benefit of racing, for me comes within the race. And it's not about your physical strength. It's about what happens in your head. It's whether you can beat those negative voices that are telling you that you're going too hard. That you won't be able to keep it up. That it's hurting and you have to slow down. That you don't care anyway - when you really do.

Testing yourself like that, plumbing your inner depths and finding out just how strong you really are, has benefits that can follow you into every aspect of your life. It gives you the confidence to know that you can weather storms, you can endure right to the end, that you have a strong and indomitable spirit.

Racing, for me at this point in my life is all about learning to have faith in myself again. Over the last couple of years with all my confusing medical issues I lost a lot of faith in my body and my mind and even after having just two races under my belt I'm starting to rebuild trust in myself again.

In fact 'faith and trust' were the words running through my head during last Tuesday's speed session. We were doing 1k and 2k alternating reps. Only 48hrs after running the half in Sydney, I wasn't really sure how my legs would be feeling. And in the first rep I could feel that they were a little bit tired. But those two little words kept coming to me and I tried to just focus on each rep and finishing off that rep strong. Instead of doing what I've done so many times in the past - dying in the last couple of reps - I managed to do my last couple of reps as my fastest. 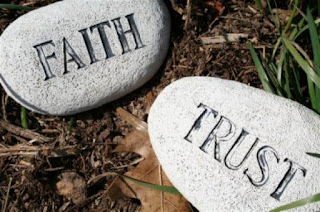 So I will continue to get out there and race even if it makes me nervous. And maybe in time it'll be something I just take in my stride.

Do you have any other reasons why you race?
Posted by Char at 8:08 PM