Everyone in the world should know by now that I've survived my busy period at work. Well, maybe not everyone. But definitely everyone with an internet connection and exceptional taste in blog-reading. I've certainly griped long and loud enough about it.

And we all know now that my busy period has passed.

But one does not survive the leotard silly season and blithely go back to their former comfortable,semi-slothful life. The adrenalin that it takes to work yourself up into a leotard-making frenzy takes some time to dissipate. And it was just that adrenalin (plus a healthy supply of PMS hormones) that was making me a little antsy on Sunday.

So I took the dogs for a walk. A nice LONG walk. Toby was ecstatic. With Iven a little out of commission (Did you know that as well as having surgery on his hand, he'd also had a tooth removed? Hey, while you're in pain you may as well add insult to injury and get it all over in one miserable hit.) And me working stupid hours then having to do pretty much everything else, the daily walks had slid down a little on the priority list. And then Toby had developed the skin infection which had made wearing a collar uncomfortable.

So we set off at a very brisk pace. Toby prancing in front of me. Me tugging at his lead and telling him to heel. Bubbles trotting meekly alongside me because she actually knows what the word 'heel' means. Toby making that awful gagging/choking/coughing noise when I have to pull him into line once again. Me checking around for do-gooders that might report me to the RSPCA for animal cruelty. Yes, it was one of those picture-perfect dog-family moments.

Luckily the mayhem only lasts about a kilometre and we'd settled into a comfortable walking truce. I was starting to mellow and let some of the adrenalin out into the universe when we came upon an interesting Sunday morning diversion.

Used to be, when I was growing up that Sunday mornings were all about sleeping in and family and church followed by a roast lunch and a nap. Times have changed and lots of people are using Sunday mornings to get their workout in. I just happened to be passing a tennis court. Just out front was a man  whose nether regions were swathed discreetly with a towel, awkwardly trying to change.

Two questions ran through my brain.

"Why would you need to change your shorts after a game of tennis?" The only answers  I could come up with were heavy-sweater or poor bladder control and I can certainly understand the strain of going for an overhead smash on a full bladder.

And "Is he commando under that towel?" It's the same question that always comes up with kilts. Just exactly what's the undergarment protocol? 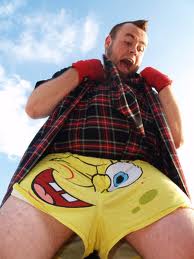 Towel Man caught sight of me approaching and kindly turned his back to save me any awkward eye contact. It was one slick movement - turn, bend and get the feet tangled in the shorts leg holes. Such a pity that he hadn't checked that his towel was fully unfurled at the back. Because it was all rucked up around his waist I got a front row, uninterrupted view of the answer to my second question - an emphatic yes.

That which has been seen can never be unseen.

Towel Man should take a lesson from this guy -

Has anyone seen any interesting sights on their runs or walks recently?
Posted by Char at 6:41 PM