Running Towards a Goal

It's a public holiday today. And it's raining.

Luckily, though, I got my Monday morning run done on Sunday afternoon. Rebel without a cause! Actually, that's not entirely true - I did have a cause and it was to be able to sleep in on the public holiday. And, as it turns out, not run in the rain. That was lucky.

Being able to change the time I run is one of the reasons I love winter. In summer if you're not on the road by 5:30 am there's no point in running. Believe me, I've tried it and even quite late afternoon it's way too hot and if I run once it's dark there are other issues - like who's going to cook dinner, what time will we finally get to eat and will I ever be able to get to sleep?

Yesterday I was running by 3:30pm. Actually that's not entirely true either. I was walking up the hill to the top road where I started running. So I was probably running by 3:37pm.

Running in the afternoon is quite a different ballgame to running in the morning. It's warm enough to be able to wear singlet and shorts rather than capris and a short sleeve shirt. I can actually see where I'm going. And there's a lot more people and cars to avoid. That means a little more waiting at lights but when you've been running pretty hard that's not actually a bad thing.

I'm also a bit less stiff once it comes to the afternoon so it doesn't take me so long to get into a rhythm. And that's good because I've been trying to treat my Monday (or Sunday) run as a tempo run so my body can start to get used to running out of my comfort zone.

When I wasn't well it was all about just doing what I could when it came to running. There was pretty much nothing when it came to making goals - apart from just being able to run when I could. I would try to get three runs done a week at the minimum but sometimes that didn't happen. And running fast was totally beyond me unless it was a quick few metres to get out of the way of a car. Being able to run structured training sessions now is great, wonderful, amazing but it's also challenging to a mind that's had only one focus over the last year or so - to keep the running as easy as possible.

So yesterday's run was three kilometres at an easy pace then I ramped it up over the next couple of k till I was running sub 5 min k's and my aim was to do as many of those as I could before I got home or died - whichever came first.

If I stop frowning and consciously relax my face running fast seems a little easier. I don't know if there's a flow-on effect to the rest of my body but it definitely feels like there is.

My intestines will react negatively if I try to run fast for more than two kilometres. But a toilet stop will give me just enough of a breather to send me on my way with renewed vigour.

Seven kilometres out of twelve done at sub-five minute pace. Happy with that. Although I'd be happier if I didn't feel the need to be quite so law-abiding. My next race is the 10k at the Gold Coast the first weekend in July and I'd really like to run under 50 mins. I'm pretty sure they don't allow me to stop my watch to duck off to the loo or to wait for traffic lights to change so I'm going to have to harden up a little and learn to love the pain. 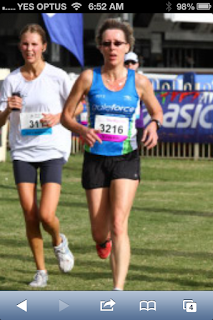