One Run is Never Enough 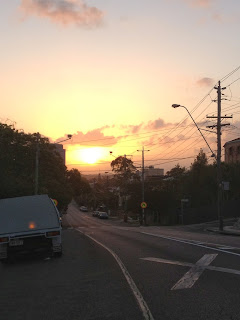 I didn't need the beautiful sunrise as enticement to get out of bed pre-dawn on Saturday morning. All I needed was the promise of a real run. Not the faux runs that I'd been doing during the week where I ran a little, walked a little then ran a little bit more.

I really wasn't too sure how I'd manage the run. On my faux runs my legs had felt a bit weird - like they wanted to go but lacked their normal strength. But as it turns out, they were back to almost normal and felt surprisingly bouncy (although I'm sure that I looked anything but bouncy) despite having to run one of the hilliest routes that we do.

And as easily as that, equilibrium was restored to my life. An hour and a bit of sweating and chatting. Then another hour or so of more chatting, refuelling and eating cake and I was all sweetness and light ... for a good few hours. Seems that I need a couple of regular runs to get my endorphins to a good base level to improve my default mood.

Or maybe I'm just a little over-due on having some alone time. And by alone time I mean having the house completely devoid of mammals with opposable thumbs that ask questions of me and expect meals on the table (or more accurately, in the fridge awaiting microwaving at the eater's leisure).

I'm probably not going to get any alone time in the foreseeable future either. Number 1 hubby is still warming MY couch for most of the day. Plus he has returned to the marital bed. So it's pretty much lose-lose for me.

Then today he had the gall to say that he was feeling well enough to accompany me on my daily coffee run - my last chance of alone time evaporated in a puff of smoke.

My dream of doing the crossword while sipping soy cappuccino wasn't a grandiose one. My dreams rarely involve first-class overseas trips on private jets or diamonds or champagne baths. I try to dream the attainable.

Poor Iven looked so pleased that he was bestowing the honour of his presence on me. Or maybe that was his excitement at being able to get out of the house. Either way I didn't have the heart to tell him that his presence didn't make my heart beat faster like it would have 29 years ago.

Does it make me an awful wife to say that what actually gets my heart racing is that Iven's Physio has said he might be able to go to work before the end of this week? That's actually a rhetorical question because I know the answer - yes, I'm an awful wife. But then none of us are perfect.

And I have some redeeming features. Like remarkable self-restraint when homicidal thoughts enter my brain. And the ability to make a pretty awesome birthday cake. 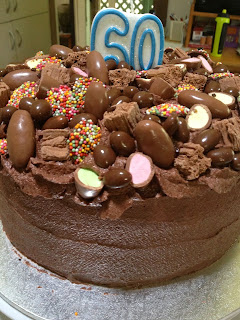 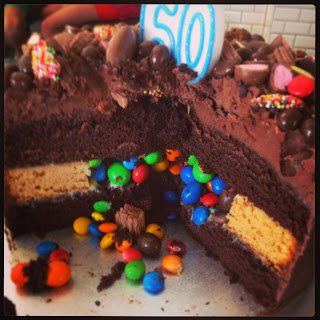 Even once Iven's back at work, I still won't be getting my house to myself for any time in the near future. It's the end of semester for my uni sons and that means swat vac followed by exams followed by about three months of vacation. Oh yay! (she says sarcastically).

That base level of endorphins better kick in soon.
Posted by Char at 6:04 PM