Today's post was going to be all about how well I was recovering from Sunday's marathon. About how good I was feeling. About how my legs were improving incrementally from one day to the next.

But things have changed in the last 24 hours and I'm posting this from my bed.

Yes, I've become a perfect example of how marathon running can reduce the efficacy of the immune system.

Apparently running for longer than 90 minutes can cause the immune system to become weaker. And there's no way in hell that I'm ever going to run a half marathon in that time, let alone a full one. Add in a bit of shivering after the race due to being soaked to the skin with rain, hanging around in big crowds at the race, sitting in a plane with recycled air (ie recycled viruses) for over two hours) and then  spending quality time in doctors' waiting rooms and pharmacies with my crippled husband and I guess that a cold was probably inevitable. I'm just grateful that it didn't happen before the race.

So while I'm lying here I've had plenty of time to analyse my race and share two tips on 'what not to do' if you want to run a PB.

Firstly, DO NOT WORK YOURSELF UP INTO SUCH A STATE THAT YOU CAN'T EAT BEFORE THE RACE. The few days before a marathon are probably the only time in your life that you get to eat carbs without guilt and pretty much without limit. This is an important part of race preparation. No fuel = no energy to run with.

That goes for fluids as well. I certainly didn't drink much the day before because I was worried about throwing everything up so when I got into the race I found I was a lot thirstier than I usually would be - particularly as the weather wasn't that warm and I wasn't sweating much. As little as 2% dehydration can lead to a 6% reduction in running performance - not so vital in a 5k race but very important in a marathon.

These two things were the only things that were actually in my control that impacted my run. The timing of my period, getting a migraine aura and all the stress I had before the race wasn't something I could have managed any differently but I know that if I'd managed to fuel decently I would have lasted a lot longer before feeling tired. And because I need to know the answer to how much better I could have run, I've already picked my next marathon.

No, I won't be running another in a few weeks. I've had too many run-ins with overtraining syndrome to even contemplate that. I'm planning on recovering properly by just taking it easy for the rest of this month and then building back up.

My next marathon will be in April next year in Canberra. All things going well and fingers crossed.

And this time I'm not so scared about what's ahead of me - those stupid long runs and setting the alarm for 3:15am. I'm actually looking forward to it.

And just a quick update on the two patients that I had to leave behind over the weekend. Iven's only made a slight improvement. I have to admit to being a negligent wife who was a little preoccupied with other stuff and I didn't insist on getting him to the physio. But he hadn't wanted to do the physio thing until he was feeling a bit better. It all came to a head on Wednesday when he was in awful pain again and wanted to go back to the hospital. Luckily a local physio managed to fit him in at very short notice and already (after just two visits) Iven's feeling more comfortable. He's still walking like a crooked man and can't sit or stand for any length of time but we're hopeful that he's on the road back.

And Toby is also doing a lot better. I don't think I mentioned this last week but poor old Toby had had an allergic reaction to something that had touched his belly last week. He'd come out in itchy welts and had licked them until his scrotum was red and oozing. Of course I didn't realise this until Friday night and then I was trying to work out the best way to get him up to the vet the next morning after I'd flown out. Thank goodness Luke could fit it in (despite having a huge load of assignments to finish off). So when I arrived home I was greeted by a much happier and less itchy puppy. 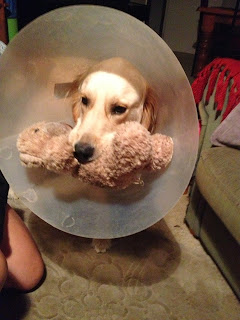