I managed to get a plethora (that's such a great word - the way it rolls off the tongue) of things wrong this weekend - but I'm still smiling.

Started off on Friday creating the Cupcake of The Week. This week's was a homage to Sam's beautiful girlfriend Hannah who is a Ranga. For those who are not quite as hip as I am (no, I will not show you my MP3 playlist which would immediately refute the previous statement), a ranga (short for orangutan) is a redhead. 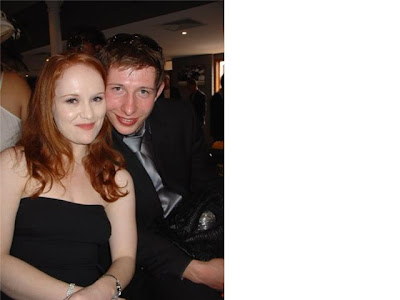 She and I had a serious discussion about the best type of cupcake for her and her people. I thought maybe orange poppyseed with the poppyseeds being representative of freckles. But Hannah likes a bit of ginger so ginger it was (also appropriate because of their stereotyped fiery natures). Its filling was marscapone flavoured with honey, cinnamon and ginger and I iced it with a lemon creamcheese frosting. 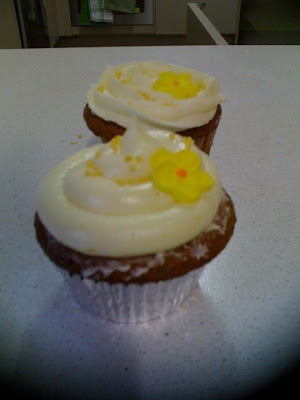 The cupcake turned out fine but the thing I did wrong was to lick my fingers, the beaters, the spoon and the bowl scraper probably a few more times than I should have. I wasn't very hungry when it got to dinner so only had a small portion. Mistake #1 - running a long run on insufficient fuel.

We had a 25k run scheduled for Saturday morning. It's the longest that I've run for a while but I was pretty confident. I'd had physio on Thursday and a massage on Friday and my hip was feeling the best it's been since it started hurting. Plus I've been doing all my exercises.

And the run did start off okay. We were cruising along at a very comfortable 6 min k's for the initial part. Thing is - I just wasn't feeling great and it felt harder than it should have for the speed. I got to 9k and took in some nutrition (and went to the loo - best to use it rather than have regret later on). I've started using Honey Shotz which are just that - shots of honey. The jelly beans were okay but I found the chewing tough while I was running. Honey Shotz have only 7 g of carb in each so you need around 4 to equal a gel. I had 3 in a zip-lock bag but I had another bag in my Spibelt so when I found that one of the Shotz had leaked everywhere it didn't worry me. I had the other two and found a tap to wash my sticky hands.

I caught up with the group (the toilet stop had put me behind) at the turnaround and we started back. And I was feeling okay - not great but not bad. Then we hit a hill and I promised myself that I'd have some more honey at the top. Got to the top and unzipped my pouch to find nothing!! I had another plastic bag in there but it just had tissues in it (for any unscheduled toilet stop). And there was still 8k to go and my hip was just starting to niggle. I kept running but with 4k to go the hip had totally mutinied and I had what I thought was a stitch. Turned out not to be a stitch but an cramp in my abs from running funny because of the hip. There was walking in the last 4k and I was the LAST PERSON HOME :(

So there's mistake #2 and 3 - not enough nutrition on the run and running too far when you're injured.

But a bit of time on my roller and tennis ball had my hip feeling fine again. I ran today with very little discomfort so I know I didn't cause any more damage.

Runs like that are character-building. You just want to quit. It's all too hard. But when you persevere you get such a sense of satisfaction - knowing that if you really have to you can pull out something from deep inside just so you can finish what you set out to do.

And talking of character-building. Sam had his soccer semi-final yesterday. The score was one all at half time. Then his team scored two early in the second half. But the other team dug down deep and managed to level the score at full time. They had to play extra time and Sam's team grinded it out and scored in the last few minutes. They're off to play the grand final! Well done Uni.
Posted by Char at 6:25 PM