One day till Christmas!!

Okay, I'll admit it. I've had a pretty good week. I finished work for the year - yay! I finished Christmas shopping - yay!! I survived the grocery shopping ... twice - yay and yay!! And I got to do a heap of baking, which put me in my happy place.

Tuesday was the last speed session before Christmas so I thought I'd bring along some goodies to share. And I put a teaser out on Facebook so people would be prepared. I made Chocolate cupcakes, fig, pecan and cinnamon cupcakes and some of Marlene's Kris Kringle cookies. 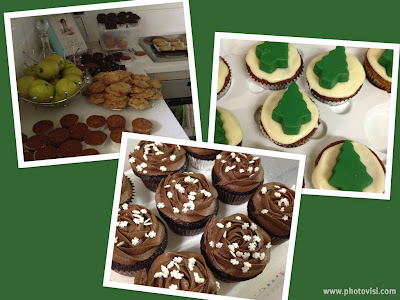 They all turned out pretty well. Luke and Becky, his girlfriend gave Marlene's cookies four thumbs up.

There was a sense of anticipation in the group as I drove up to running on Tuesday morning. Even before I left home I knew some people were looking forward to it. 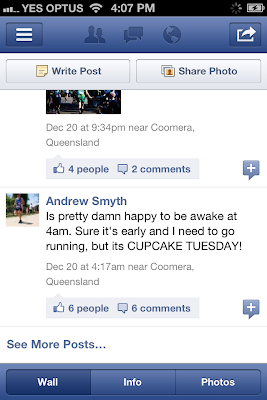 I'll admit I felt a little like a wounded antelope in amongst a pack of hyenas - but in a good way. We did our session and then I was given an escort back to the car that HRH Queen Elizabeth would have been envious of. Seriously, there's nothing better than feeding hungry runners. You will NEVER get a better review of your cooking or more appreciation.

I managed to get rid of almost all of my baking and was facing the prospect of heading into Christmas Day with empty cake containers so yesterday I decided to break out the cupcake tins again. I had a new icing tip and I'd watched a tutorial on YouTube and now was my chance to try something different. I baked my chocolate no-fail cupcakes. After 30 minutes in the oven they were perfect so I went to take them out. And that's when disaster struck.

I swear I used my usual pot holder but this time I could feel the heat of the pan burning my fingers. So I did what any wuss with great self-preservation skills would do. I dropped the tin on the floor. Face down! And my tin has a teflon coating so all of the cakes fell out. 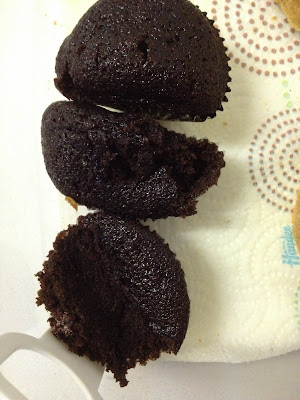 Hot chocolate cupcakes a very malleable apparently. They'll take on the shape of any surface that they're dropped or flung on. I managed to salvage a few at least so I could try the new icing technique. They had to fully cool so I went off to have a nap (damn, I love holidays and daily, guilt-free naps). When I got back to the kitchen a little while later (okay, it was 3 hours later but it was a really good nap) I found the cakes covered in ants. 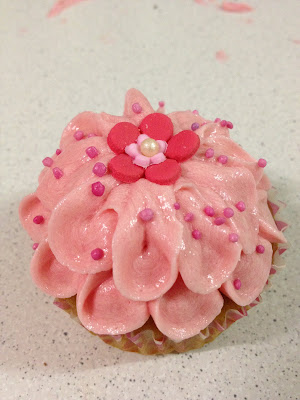 Despite all the disasters I got a couple looking really pretty. Pity I can't let anyone eat them. Except Coach Chris. Sorry, Chris but I did say I'd get back at you for that 'special' session. You thought it was going to be laxatives in the brownies - well you were wrong!

Happy Christmas to everyone. I hope you manage to have a Christmas free of kitchen disasters. But if you do have one - photograph it and put it on your blog!
Posted by Char at 10:01 PM