- Totally missed the start of it cause I was asleep. Boy do I know how to party!! I had half a glass of apple and pear cider, watched a lame movie with Iven (I liked it but he thought it was lame), ate Christmas chocolate till I felt a bit ill then went to bed with a good book. I did get a party invite but Iven's not much into partying and I didn't want him to see the new year in by himself ... and then I go and fall asleep and he saw it in by himself anyway. But he was kind enough to give me a re-enactment this morning which involved him making rowdy crowd noises, counting down and then exploding!

- I changed every calendar in my house. Best to start the year on the right note and that involves having some idea of what year and date it is. I like to do this just in case I'm involved in an accident and I'm taken to hospital and they ask me where I am and what date it is. My sense of direction is pretty poor so I'll probably get that one wrong (unless they're satisfied with a generic 'in the hospital' answer). At least if I get the date right I'll have a good chance of not having a hole drilled into my brain.

- I've cleaned up my lounge room. Dusted and vacuumed away all traces of that huge party Iven and I had last night so the boys don't get the wrong idea. (All right - the real reason is because I don't have my cleaning lady for a couple of weeks and the dog hair was building up at such a prodigious rate that I was being mistaken for Bonobo every time I did my stretches or yoga. And I'm pretty sure I may have a fur ball)

- I had my first coffee of 2012. Unfortunately we could only find McDonalds open at our local shopping centre but beggars can't be choosers.

- I made some flowers for all the birthday cakes that the new year will bring. This is so much fun. It reminds me of being back in kindy and cutting out shapes with Play-Doh. But these flowers taste way better than the Play-Doh ones used to. 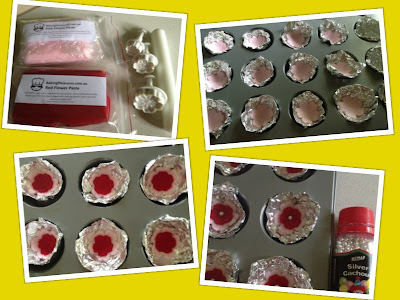 And the finished product on a a cupcake - Pretty!! 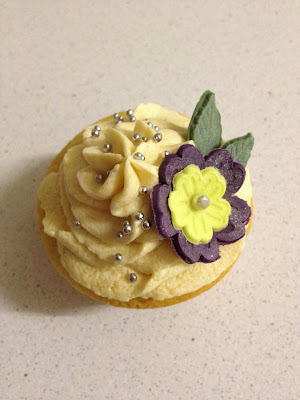 - I've done my strength session. I can do two sets of 25 pushups now - FROM MY TOES. You might not be impressed but considering I could hardly do 10 in a row. I have very long arms and long levers don't make for strong levers. (it's a physics thing) Some boys may have compared my arms to a chimp's when I was a teenager and thus I feel a strong affinity to Bonobos. My planks have doubled in length and my power step ups are a thing of beauty (at least I'm not losing balance or wetting myself when I do them any more)

Did I make any New Year's Resolutions? Not really. I'll be just doing more of the same. Tweaking things here and there to make things work better for me. Have I planned much for the running year ahead? Again, not really. A lot will depend on how I'm feeling physically. In a general sense I want to run four times a week, strength train twice and throw in some yoga at least three times a week. With my running I'd like to get my mileage back up around the 50-55k per week but as far as events are concerned, I'm just going to see what takes my fancy as the year rolls on.

Has anyone made any major resolutions for 2012? And did anyone party harder than Ive and myself?
Posted by Char at 6:40 PM