There's something about a puppy that brings a lot of energy and laughter to a house. Every one in our household has gotten a new lease of life. They're getting up earlier. They're playing more. Bubbles is having more attention than she has in years and Toby is learning his place in the Donaldson pack. 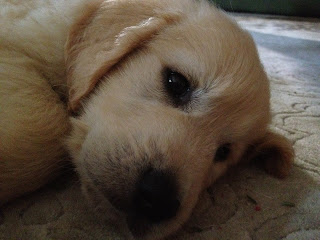 I've just finished reading the latest Jodi Piccoult book - Lone Wolf. It's all about wolves and The Pack. It was a timely reminder of the nature of dogs and the role of the pack in their rearing. I've had four dogs in my life time and my role has always been Alpha bitch. I'm the one at home most of the time so it's up to me to do the training. Luckily the boys are old enough to be on board with me and not subvert all the hard work that I've put in. So I've been spending a lot of time going outside with Toby and praising him when he does his business. I've been teaching him how to navigate stairs - up was mastered in 24 hours but down is still a work in progress and down is a fundamental part of the whole toilet training business.

But the biggest issue with little puppies and their sharp little teeth, is the chewing thing. He'd like to chew anything he can put his teeth into but we're having to teach him that fingers, feet and ankles are not chew toys and any sort of fabric is out of bounds because puppies can't distinguish between a rag and someone's socks or undies (yes, my boys still leave these on their floors - don't you Luke??) We've got plenty of chew toys so we're playing the game of substitution - he plays with his bedding, he get roused on and has the bedding taken away and substituted with his rubber bone or a ball.

And we've started basic obedience. It's amazing what you can do with a hungry puppy (and let's face it, he's hungry a lot) and a bit of food. This is day four and he's on his way to mastering 'come' and 'sit'. Having a seven week old puppy sit on command has got to be the cutest thing. I don't know if it's his golden retriever nature but he really wants to please us.

And even Bubbles is starting to get on board with having an annoying younger brother. She's spent a lot of the first two days snarling and snapping at him but not biting - just warning. She was jumping up on the couch to have the dominant position and to let him know she's boss. I could almost hear her plotting revenge on us for bringing this major disturbance into her life - a little 'mistake' in the hallway where we might step in it, a vomit on our new doona cover, gnawing on shoes and blaming the puppy. But yesterday she realised that she has someone to play with when she's in the mood - something that Nelson hadn't been able to do for the last year or so. And she's getting to lick out the cooking bowls now so it's not all bad. 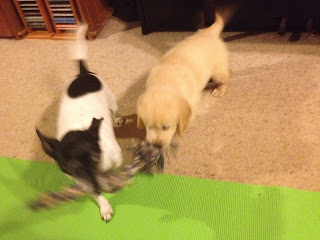 And on top of all this puppy fun, I had the best run for a long while yesterday. Only two walking sections (and a toilet break) and my running pace was just under 6 min per k while keeping my heart rate in a good zone. Awesome!