It was a sad day at the Donaldson house yesterday. We lost a member who'd been with us for 13 years. 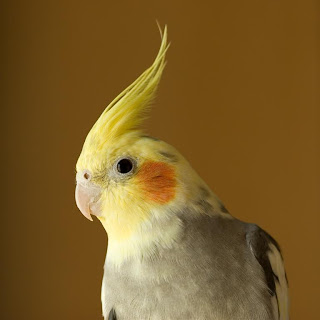 I'd noticed an unpleasant smell in out lounge room last night. But having an incontinent dalmatian, unpleasant smells are not unusual. And the unpleasant smell seemed to come and go so I didn't think anything of it until I went to cover Hercules's cage. There he was - stiff as a board lying on the bottom of his cage. He'd finally dropped off his perch.

Of course Iven had already gone to bed. That man is never around when there are blocked toilets or feathered corpses that need disposing. So I did what any self-respecting ex-vet would do. I dismantled the cage so I wouldn't actually have to touch his deadness and I tipped him and the paper that was lining his cage (complete with seed husks and bird droppings) into a plastic bag. I tied it up tight and dropped it into the wheelie bin praying that it doesn't get too warm over the next week.

I felt bad that I hadn't noticed that he'd been dead earlier. After all, if he was starting to smell then he'd probably been dead for a while. I'm no CSI expert so I couldn't rely on core body temperature or stage of rigor but I worked out scientifically an approximate time of death. I'd fed him and changed his water on Sunday night and he was alive then. Iven had taken the cover off his cage yesterday morning (he's pretty sure) and he was still alive then. He was definitely dead when I went to cover him. So his time of death is somewhere between 6 am and 9:30pm last night.

Hercules had been a Christmas present for Josh back when he was 12. I'd decided that Josh needed to learn compassion and caring by having his own pet. Let's just say that I've enjoyed feeding and cleaning up after Hercules for the past 13 years. We'd taught him how to say 'Hello' and to wolf whistle. I'm going to miss those little ego-boosts. RIP Hercules.

And while I'm on the subject of animals - I found this today. 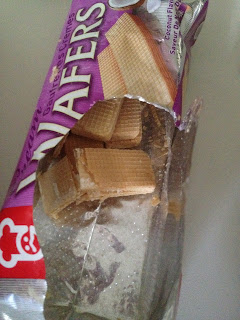 Nelson is literally on his last legs. He's 14, has hip displasia and can hardly walk, he's covered with tumours and yet he's still stealing food. You can't teach an old dog new tricks.

And that leads perfectly to my last little story. When Josh was 5 I had to take him to the doctor to get a few immunisations before he started school. We went with my sister and her daughter, who also needed shots. Because Josh was older than Lauren AND a boy, so naturally braver, he decided to go first and show her how it was done. He did a great job of holding it together and not crying so when the doctor held out a jar of jellybeans he decided that he'd earned a whole handful. It was one of those mummy-cringe moments.

Yesterday at work he was given a flu vaccine. You can just imagine how proud I felt when I got this text - 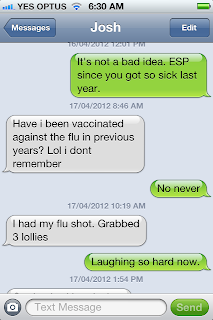 No - you can't teach an old dog new tricks.