When I woke up this morning it was still pitch black outside. Once I could finally focus on my clock I saw it was 4:20 - not 2am liked I'd hoped. I hadn't really slept that well and it was thirty minutes before my alarm was going to go off. That's not really enough time to go back to sleep but it's plenty of time to have a long internal discussion with myself.

Part of me just wanted to turn off the alarm and try to go back to sleep.  I'd run yesterday and I have to be so careful about not running too much or too hard. This was a special public holiday two hour block-buster training session that was going to have a lot of hill running incorporated and I can't run hills yet. And we were meeting in a part of the city that I'm not totally familiar with and I was worried about being able to find a park.

But the other part of me knew that I could have a nap in the afternoon because it was a public holiday. Coach Chris had personally rung me to invite me to the session and told me what I could do instead of the hill reps. It was going to be early enough that even if I wasn't familiar with the area I wouldn't have the pressure of traffic to make my search for a park difficult. I was going to be able to spend a lot longer with the group than I have on my usual runs (and that means longer to chat with more people!). And then there was the promise of breakfast ...

I got out of bed. And had a great morning. 10k running!! Almost 3 hours of chat time. So much laughter at breakfast that I went home with a little headache. And I almost managed to convince two of the girls that I was 36.

You might regret missing a run but you never regret the runs you do.


I've got, what my sons like to call, a 'first world problem'. I offered to make cupcakes for my great-niece's first birthday and Nicki, her Mum, asked me to go with a purple and green theme. I decided to make the flowers for it and there-in lies my problem. Even though it hasn't been rainy lately, it's been really humid and I'm not being able to get them to dry. Talk about stressful. No, I'm not likely to get eaten by a lion as I walk 10k to the well to get clean water and I don't have to sleep under a pile of newspapers to keep warm. My biggest problem is getting sugar flowers to dry. 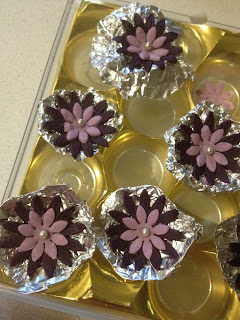 One of my hens sets big audacious goals for herself. She's been laying eggs like this - 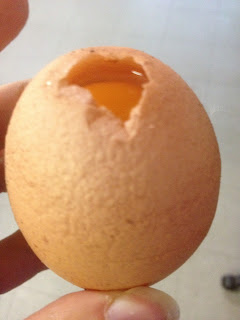 It hasn't been pecked at because the inner membrane is still intact. She's just run out of shell. I love that she's so ambitious.

I mentioned in a previous post that I'd seen The Lucky One and fallen in love with some of the dogs stars. I decided to look on the RSPCA web-site to see what's available. Such cute puppies!! I fell in love with way too many of their adorable faces and just had to show Iven (ie - try to talk him into a new puppy). When I called Iven to look, Nelson (our 14 year old, crippled and incontinent dalmatian) decided to come too. He probably thought there was food available because why else would I be yelling from the kitchen. I had an immediate attack of the guilts and had to minimise the screen (like I was one of my own sons looking at porn - not that they would ever do that ... I hope). I felt like I was plotting Nellie's demise and choosing his successor.

But I think Nelson must have picked up on my guilt. He's been timing his 'little accidents' for when he knows I'm going to be the only one around to do the clean up. The other night I read the signs and got him outside in time. I waited around to help him back into the house then turned around to lock up the back door and while I was otherwise occupied, he walked through the kitchen dropping his load. The last night he waited till Iven went to bed and laid one down just below where I was lying on the couch. This morning I almost stepped in one just outside my bedroom door. Okay Nelson! I promise I won't look at the RSPCA site any more.