Hope On The Horizon

Yes, I know I don't do speed at the moment but I still go to the session ... kind of. I get up in the dark at an ungodly hour. I delay putting on my running clothes for as long as possible because it's just sooo cold. And I leave home around 5:15 am to meet with the squad. We stand around and chat for a while until Coach Chris says the word. And then the squad goes one way and I go the other.

I've been doing this nearly all year and I SO want to run with the squad again. But I'm doing my absolute best to get on top of things so for the moment I'll continue to run the other way. I do about 3k around the university and that brings me to where the squad is doing their reps. I have a little rest for a while - chat to Coach Chris and Coach Barry and then do a couple of out and back runs of about a kilometre through the group.

But yesterday something happened that hasn't happened for a while. I actually passed a couple of runners (no, not the ones that were walking their recovery - ones that were running). I stopped watching my HR monitor for just a little bit and did 2 X 1k and an 800m (because there wasn't quite enough time to do a third k). I didn't run it super hard. I just ran a little more strongly AND IT FELT GOOD.

It felt like it won't be too much longer before I can rejoin the group. Not to run hard, just a little bit harder than what I've been doing.

I chatted with a squad member after the session and she asked how it had gone. Honestly, I never quite know how it's gone until a couple of hours after the session. And in all honesty I did get a little nauseated. But I could have a nap when I got home (one of the perks of working for yourself) and I felt pretty good for the rest of the day. And today is a rest day so I'll be good to go for my run tomorrow.

Tomorrow's run will be back to easy again. I'm allowed to be reckless once or twice a week but the rest of the time I have to be sensible.

Do your children complain to you a lot? Mine tend to. They complain about assignments, about group members, about having too much work, about the weather, about idiots who have licences, about their health. The list could go on and on. And I'll generally give them a bit of the ear so they can get it off their chest.

Yesterday, though, I heard a complaint that I thought was a bit over the top. My youngest son came up to me to tell me that I was making his life difficult by providing too many choices for dessert. Seriously??!! I could understand him complaining if there was nothing in the fridge or pantry. But to complain because there are too many yummy things to eat ... No sympathy here Luke.

And finally a little brag about my genius puppy (who hasn't quite mastered toilet training still).


He is possible the greediest, hungriest puppy in existence. But food is a great motivator for training and he's proving to be a fairly quick learner.

And Bubbles is really learning to love her little adopted brother - the way siblings always love each other ... with a little hate thrown in. 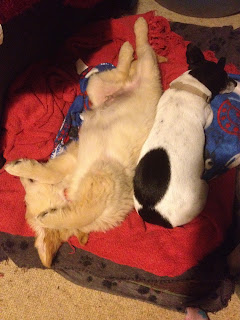