I'm sick. Again! This time it really is man flu. Or as we women refer to as a simple cold. And I think it totally sucks that I couldn't have gotten this a couple of weeks ago when I had the flu. Kill two birds with one stone - or two viruses with one break from running. My body has not been kind to my running ambitions this year. It's like it's laid down the welcome mat and invited any of the circulating nasties to come visit and stay a while.

But if I'm not able to attend to my running addiction, at least I have other addictions to turn to. For example, the Olympics. Because I don't have to get up to run at a ridiculous hour, I can stay up extra late then wake up at the ridiculous hour I was going to run at and sit under a doona cuddling the snoring love of my life (that's Toby not Iven). And then I have an excuse to go back to bed and nap for a few hours.

Australia is going great - if you prefer silver to gold. We keep getting pipped at the post by the Mother Country. And I'm starting to believe that it's time Australia became a republic. No more being subservient to the Queen and Her country - politically OR on the sporting field. Especially on the sporting field! Those Poms get a little too cocky when they beat us and it only fuels their belief that they kept the best and sent off only the dross. (sorry, Liz - I told you I was a very partisan, competitive Olympic watcher.)

Toby's my second addiction. After all what's not to love about this gorgeous, intelligent boy?! 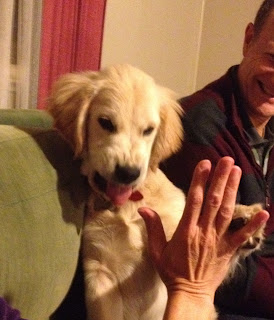 Oops! I put up the wrong photo. He really doesn't look so 'special' normally. And he doesn't usually have to poke his tongue out to perform any of his tricks. He's been a great companion again while I've been under the weather. He hops up on the couch with me (yes, I'm one of THOSE people who let their dogs sit on the furniture) and snuggles in. He rests his head on my lap and looks up with those big brown eyes, imploring me to pat him. And he likes to get rid of my piles of snotty tissues - by chewing them into shreds and leaving them strewn all over the carpet (note to self - don't leave piles of snotty tissues in reach of the dog.)

My other addiction is baking cupcakes. Pinterest has a lot to answer for in fuelling this addiction. I see something all chocolatey and delicious looking and I just have to make it. The cake is a nutella-flavoured one from here with a couple of changes because I don't have cake flour or buttermilk - I just substituted self-raising flour for the cake flour, bicarb soda and baking powder and used plain milk instead of buttermilk and it worked out just fine.

The frosting is caramel buttercream drizzled with melted chocolate (I had to add a bit of vegetable oil to get it to drizzling consistency) and topped with a Nestle Rolo. Looks good enough to eat. 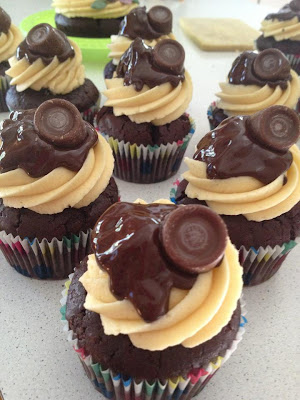 My cold is starting to improve - I know because I could smell the cakes while they were baking. And it's just as well it's improving because that means I'll be able to run soon. I may have a few extra calories to run off. That nutella batter tasted pretty good and it's my job as a responsible baker to quality control what comes out of my kitchen, isn't it?!