It all went horribly wrong the other day.

Remember I had a cold a few weeks ago? Well the cold is well past but my sinuses still pretend like I have a cold when I run. And being a lady who's been brung up proper (thanks Mum), there are just some things that I shouldn't do. Picking my nose is one of them. And wiping my nose on my sleeve is another. A lady should always carry a scented pocket handkerchief (preferably hand-embroidered with little garlands of flowers and her initials) around with her BUT my tights don't have any pockets and I don't actually own a handkerchief, being that it's the 21st century and not the 18th. And every time I stuff my bra with tissues it looks like I have some sort of deformity and they end up a sodden mass of sweaty pulp and there-in lies the dilemma.

Last Thursday my nose was running like a tap that had no washer. I had sniffed but my nasal vacuum was inadequate for the flow. I'd surreptitiously used the back of my hand (major unladylike action but no one was around and if a tree falls in the forest and no ones' around does it make a sound?) but the flow wouldn't stop. So I was left with just one last weapon in my arsenal - the snot rocket.

I've seen the snot rocket performed on a few occasions and it seems quite simple. One blocks the airflow to one side of the nose then forcibly exhales through the other nostril, causing the snot to rocket elegantly to earth. Easy!! Or maybe not. I did what I thought I'd seen before but I left out one important step. I forgot to aim. And being a little tired from my hilly route, the force of exhalation wasn't as explosive as required.

You don't look quite so ladylike with a long cascade of booger flowing from your nose and landing on your thigh. And of course this all happened when a peloton was passing. There were some stares - and not because I'm a fit, foxy lady. The amount of snot coming from my nose was more like what you'd find with a cow than a fox.

Did you know that black tights can show snot? I had to wear my mark of shame for the five kilometres home.

It looks like I've got something new to practice.

And talking about practice, I made the cake that I've been planning since last week. Making a three-layered cake where each layer is a different flavour means a lot of work. And the extra batter means that we also have a lot of cupcakes to eat this week. But I'm really happy with the end result. (And I actually ate a small bit of this one to make sure there wasn't too much happening. 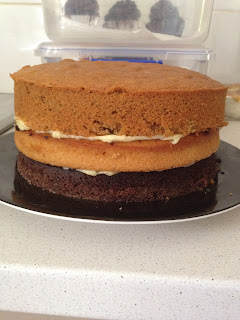 Coffee, caramel and chocolate cakes layered together with a white chocolate ganache 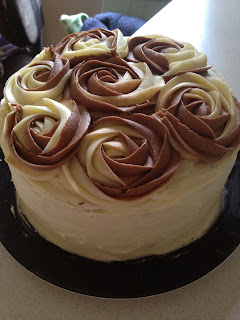 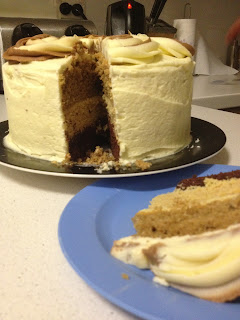 Now I have enough cake in my kitchen to put on a small garden party for 20 of my closest friends. Looks like I'll be giving away samples again this week.
Posted by Char at 12:05 AM