Pieces of My Life

Pieces of my life.

- Luke and his girlfriend Becky went to the Ekka on Wednesday. The Ekka is basically the equivalent of a state fair, I think. I used to love going as a child but as an adult I'm happy for the kids to go without me. They turned up late in the evening with their arms full of loot that they'd bought and won. Luke had managed to win two giant stuffed toys - one was a hedgehog and the other was like a giant purple My Little Pony.

Toby was not a happy camper. There was something quite terrifying about that pony. His hackles went up and he backed away quickly and all of a sudden he was on my lap. And that's where he stayed until the pony was removed. What a Mummy's boy!! I don't think that he's going to make much of a guard dog. 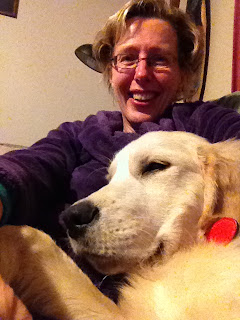 - Running is still a bit of a struggle. I know I can't expect too much because everything I've read says that it'll take time and I'll have set-backs. I'd count having the flu followed by a cold counts as a set-back so I'm pleased that things aren't as bad as they were at the beginning of the year. Yesterday the plan was to do a very slow 8-10k. I started the run by walking into a door (It's still pretty dark at 5:30am) and finished with a dog sitting on my head ( I haven't found a safe place to do my stretches yet - Toby does love to be close to me). Luckily the bit in the middle - the actual running bit - wasn't too bad. I managed to keep a low, for me, heart rate so I'll take count that as a success.

- And talking about successes ... 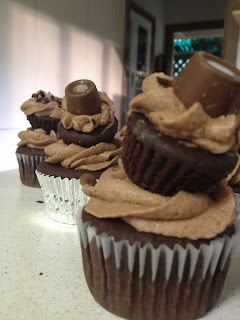 Thanks to Pinterest for the new cupcake idea. One of the men in the squad asked me not to put any more cake pics on Facebook because he's trying to clean up his diet. Silly Chris! He obviously didn't realise that asking that was like asking me to put up pictures of my most decadent, enticing cakes. I'm contrary like that.

- Our hens stopped laying. I know they don't lay for ever and I know we'd basically caused them to become osteoporotic by feeding them low-calcium food (and by we I mean Iven). I thought they'd gone into menopause. They were a little moody - you couldn't look at them sideways without them getting into a flap. And I was sure I saw one of the hens fanning the other through a hot flush. But apparently they'd just been having a laying hiatus and they've come back with a vengeance. They're laying eggs so big that I can't get the egg container to close. The egg on the right is a normal, bought-from-the-shop extra large egg. The one on the left is just showing off. 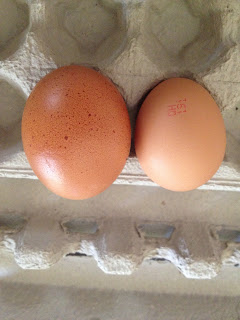 I hope everyone has a great weekend filled with family, friends and little fitness too :-)