I've been a very diligent puppy mummy lately. Nearly every afternoon Toby and I go for a walk. It takes us about 45 minutes and ends with us on the school oval next to our house. And usually when we get to this point we run as fast as we can - tongues and ears flapping in the breeze, all full of puppy joy.

On Friday we got to this point and I decided to channel my inner Allyson Felix. Seriously, that girl has to be the prettiest runner at the Olympics. I'm not talking about her face, I'm talking about form. Long strides that look effortless. A back kick that gives it's own encouragement. My form is nothing like that - but a girl can dream.

I told Toby that we were going to sprint and he was ready. My head took me to the finishing straight of the 200. It was me and my dog in lane seven and we were pulling away from all the other runners. We were getting faster and faster and had a clear lead ... and then something happened - let's just call it a legacy from having three children. Way to come down to earth - not an Olympic sprinter, just a pre-menopausal mother! But it did leave me wondering if that's ever happened at the Olympics. Clean up in aisle three!!

Yes, it's still all about the Olympics for just tiny bit longer. I had a really enjoyable night the other night watching the diving. It was the men's 10m platform and it's an event filled with suspense. Will they hit their feet on the platform (yes, a couple did)? Will they his their heads (no one did thank goodness)? And will anyone lose their precariously positioned bathers? 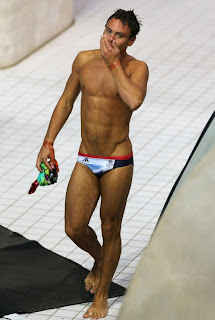 I spent a while discussing optimal swimming costume height with Iven. Personally I like them so the whole gluteal is covered and there is no hint of plumber's crack but boys these days like to wear their costumes low. I also looked with my professional eye at how the pattern on the costume could enhance or disguise the wearers 'package.' And I must emphasise that I did this in a purely professional context!

There was one diver who had a particularly low-cut pair of togs and I watched with interest as he placed his hands on the diving platform and lifted himself slowly into a handstand position. And it was at this point I heard the TV commentator say "if he falls out, he'll lose a lot of points."

Immediately I thought - depends on who's judging. If they're a group of judges who've been reading 50  Shades of Grey during their lunch break he might get a few bonus points, especially if he points his toes. Then I realised that he meant if the diver falls out of the handstand. Perfectly understandable mistake if you ask me.