I Have A Dream

Who hasn't been inspired over the last week? If you haven't then you're either NOT a sports fan or you haven't watched enough of the Olympics. I've been totally inspired by the feats that we've seen and the knowledge of all the hard work that's gone into those performances. The hours spent on the water, in the water, in the gym, on the roads, at the athletics track ...

And this inspiration has lit something deep within me - my very own Olympic flame (which has nothing to do with gastric reflux and eating junk food while watching the Olympics late into the night). I've decided which sport I'm going to compete at in Rio in 2016. No, stop laughing! I'm perfectly serious. I have the will and I have a plan. (Sorry Jenni I should have warned you not to be eating dinner when you read this - can't have you choking again)

So the sport I've selected is Hockey. And if you've been watching you'd understand why too. Hockey does incredible things to a girl's physique - those deltoids, the beautifully muscled legs and those abs! I've always wanted flat abs, maybe with a little definition other than a belly button. 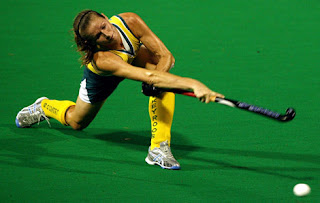 But it's not all about vanity. You also get a stick with a hook on it. How useful would that stick be for picking up washing from the floor NEXT to the washing basket?  And for whacking recalcitrant children - especially when they're just a little out of your reach (not that I condone child abuse in any way - I'm just talking about whacking that doesn't leave a bruise or any other incriminating mark). In fact you could hook the child's leg to bring him/her closer before deftly unhooking and tapping him/her gently on the backside. I could also use it to pull down branches on our tangelo tree so I could pick the ones that are too high to reach.
I did a little bit of hockey back in high school PE in grade 8 ... in 1975. So I may have a bit of work to do. First of all I'll have to bone up on the rules because those 8 one hour lessons haven't exactly stuck in my memory. Shouldn't be too hard as long as I keep doing the Sudoku and crosswords to keep my nemesis, dementia, at bay.

Next I'll have to grow my hair long enough to hold a ponytail. I haven't had hair that long since, let me think - probably 1975 when I was doing those hockey lessons. I've got four years to grow it so I'm not too concerned. And if worse comes to worse I can always ask my hairdresser sister, Cindy, to put in extensions and to bleach out all the grey that will be there in four years. I'd better start saving my money now.

I'll have to get over this post viral syndrome for once and for all. But I've seen so many other athletes at the games who've had issues with it. I figure I'm in elite company and if they can overcome, so can I.

Probably the most important thing that I'll have to work on in the next four years is changing direction while running, holding a stick while running, hitting a ball while running without poking my tongue out and trying not to hit anyone else (apart from my children) with the stick. Jumping out of the way of the ball also appears to be a useful skill so I might have to practice that too. I'm sure my kids would happily throw hard hockey balls at me (especially after I've whacked them with my hockey stick) so I can become the best ball-avoider there is.

I may have to talk the Australian Olympic Committee into changing our country's colours. Gold is such a hard colour to wear - particularly when you're a little more mature. I'm thinking that a nice aqua would suit most complexions. But if they REALLY can't change the colour I'll just have to do the fake tan thing. I'm not likely to sweat too much during the matches in Rio am I? Can't have those nasty little sweat-streaks ruining a good tan.

So that's the dream and the plan that's going to get me there. But in the meanwhile it's back to the TV to become even more inspired (if that's even possible). Tonight we'll all be cheering on Meagen Nay in the 200m backstroke. My son Sam worked with her on her strength training so I'm emotionally invested.

Anyone else been inspired? What event what you most like to compete in?