Wrapping Them in Cotton Wool

Bringing up a puppy is a lot like bringing up a child. You feed them, you protect them, you teach them manners and socialise them. With kids a lot of this socialisation happens when they are exposed to other people's kids and it's a bit the same with Toby. He's had a couple of 'exposures' lately that took me right back to when my kids were young.

I sent my beautiful, innocent little son Sam off to school when he was five and a half. He was the oldest and hadn't been terribly exposed to 'worldly' kids. He'd been to kindy and pre school but the kids there were a lot like him - sweet and kind. So the first week of school was a bit of an eye-opening experience to both him and me.

It was only his third day when he came home and asked me a question that had been bothering him all day.

"Mum, am I a poofer?" (He meant poofter - a not-so-nice word referring to male homosexuals)

I'm sure I didn't hide the look of horror - not that my son might be homosexual, but that someone had obviously addressed him that way. I might blow snot rockets (very badly) but I had no intention of my kids using derogatory language like that - and especially using it incorrectly.

I assured him that he wasn't and left it at that. After all he hadn't asked me what a 'poofer' was and having to explain it was going to open a whole new can of worms. Five and a half is a little young to be learning about sex.

Then the very next day he came home proud with his new knowledge.

"I know what the rude finger is!"

We had to have a conversation about rude words and rude gestures. And I was incensed that my gorgeous little boy was being sullied by exposure to a lower element. So I went to see the teacher.

I explained why I was there and her eyes almost rolled back in her head. Yep, I was one of 'those' parents. An over-protective complainer. She explained very slowly to me, like I was a bit simple, that there was very little she could do when kids get together in the playground and what Sam had learnt wasn't part of the curriculum.

Basically her message was 'suck it up, he's going to hear it whether you want him to or not.

Yesterday Toby had a similar exposure to, shall we say, a rougher element. Hamish is a West Highland White (I actually just typed shite - it's funny what your fingers can come up with subliminally) terrier who often walks around the same areas as Toby and I. His owner Joan is a lovely older lady but, quite frankly, her Hamish has not been brought up as nicely as Toby. When Toby meets a dog he wags his tail and assumes the 'let's play' pose. He may sniff a butt or two (and sometimes even an owners crotch) but I see that as acceptable doggy behaviour.

When Hamish meets another dog he goes straight into humping mode. And it doesn't really matter which end he's at. A head is as good as a tail in Hamish's book. While I totally 'get' that Toby is an attractive dog, Hamish's behaviour is akin to paedophilia and it had Toby totally bewildered. I will be giving Joan a wide berth next time I see her.

And then there was THE CAT.

Last week we took a new route which took us past the house of one of Josh's primary school friends. We were just walking past the front gate when I saw THE CAT sitting on the front path staring at Toby with his round green eyes.Toby took little interest in him but I can't say the same about THE CAT. He started to follow us down the street.

I thought he'd lose interest once we'd reached the boundary of his property but no - THE CAT wanted to make sure that we were well and truly gone. We walked a few paces and THE CAT walked a few paces. We stopped and THE CAT stopped. It was a bit like a scene in a bad spy movie.This continued with Toby getting increasingly excited about his new companion so I decided to let Toby say hello. Toby did his usual - got down in the play pose - and that's when all hell broke loose. That territorial, dog-hating feline came at us hissing and spitting and flashing evil-looking talons. So we exited, stage left - one of us with his tail between his legs. 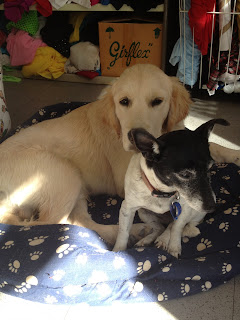 Sometimes the only safe place is home in bed with your 'sister'.


So in one week we have learnt a little of the birds and the bees and we've also learnt that not everyone is friendly. And I thought we live in a nice neighbourhood. 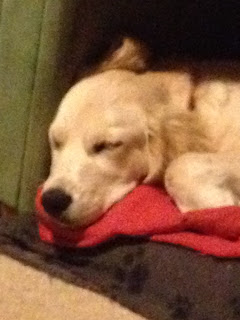