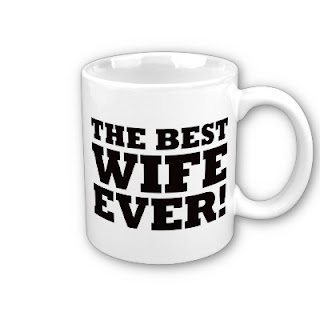 I blathered on a little while back about marriage and the promises made to each other. Promises to love and cherish. Promises to support each other. Promises to be a help-meet. I know that's a pretty old-fashioned term and possibly lots of you have never heard it before. I know it because I am old and smart (I've been called a smart mouth enough times to know that people think I'm pretty clever). And because I went to church long enough to get through Genesis.

A help-meet, for all you youngies and heathens out there, is a helpful mate. A spouse who helps their partner.

Because I'm not one to hide my light under a bushel, I'd like to say that I'm a pretty awesome help-meet.

Iven recently turned 60. We didn't make a fuss over him turning 60 because he didn't want a fuss made. In fact, if he'd been able to cancel his birthday all together (minus the cake of course) he'd have done so. He wasn't happy about turning 60.

Iven's not been happy about any of the signs of aging. When he needed to get glasses at 49 (most people need them at 40 so he did pretty well), he was down for a couple of weeks. Grey hairs would have been plucked out if doing so hadn't left him totally bald. But those long nasal hairs and eyebrow hairs which grow just to taunt a man with a thinning pate have been ruthlessly plucked out.


I was sympathetic. Sure I wanted to throw him a huge bash complete with fireworks and jugglers and minstrels (and if you believe that you might also believe that my unicorn pees rainbows and gave birth to a litter of pink chickens and lavender lambs) but I respected his wishes and bought him some gardening stuff (if that's not a dead give-away of impending retirement, nothing is) and made him a fruitcake filled with dried fruit cut up really small and no nuts because they're a choking hazard.

But sometimes being sympathetic isn't being a good wife. Sometimes being a good wife involves identifying the problem (denial of age) and helping one's spouse come to the point of acceptance and peace. Sometimes this involves pulling out a scalpel and lancing a boil. (Remind me some time to tell you the story of how, as a young vet, I actually did pull out a scalpel and cut out a cyst from his chest. That's true love!)

So I did the kindest thing I could do. I ordered him a Senior's Card. That was my version of lancing the boil without anaesthetic and using salt to cauterise and sterilise the wound. 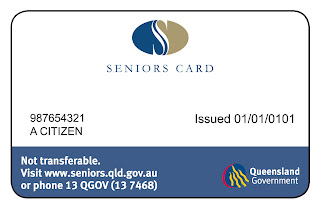 He didn't seem that excited when I presented it to him. Even after I explained that he'd get discounts off movies and coffee and other stuff. And he was a little careless with it. I found it under a heap of rubbish on our filing cabinet. So I thoughtfully rescued it and put it in his wallet. And then when we went to the movies I MADE him use it! And now he's on his way to acceptance and peace.

But I'm starting to wonder whether I shouldn't have done all this wonderful wifey stuff in about a month and a half. You see, it's my 50th birthday in about five weeks which gives him ample time to plot his revenge work on a plan to help me reach acceptance and peace with my new age group. And while jewellery may have been a bit much to ask for, seeing as how he's showered me with it lately, I'd really rather not get support stockings, incontinence pads and a funeral insurance package.

Maybe, for once, I'll be keeping my mouth shut about my impending birthday. I might get lucky, after all he did forget our anniversary.
Posted by Char at 12:33 PM