Have you ever gotten a runner's high? If you're a runner then you probably have and that's why you're still a runner. 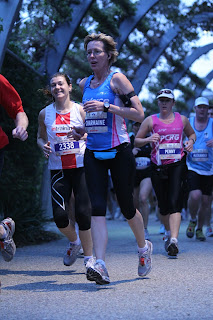 Have you ever got a runner's high that almost made you do something stupid? I can say yes to this question too after Saturday.

I'd like to start by saying that I had a great running week last week. It started with a good 12k on Monday, along Hillside Terrace which is the only form of hill training that I'm doing at the moment. That 12k was immediately followed by a 3k walk with the dogs so I'd finished the run in respectable shape.

Tuesday was speed and Coach Chris had us running alternate 1k and 500m repeats. For the first time in what seems forever, I ran all my 1k's sub 4:50 and all the 500s sub 2:20. Sign me up for the next Olympics now!

Thursday I ran a run of undisclosed length (I don't want to say so I don't get in trouble with Coach Chris). It felt good and it felt pretty easy (except for the second last k which is a bit of a hill) and when I got home I saw that I'd run it faster than I'd been running for a while and yet my average heart rate was lower.

Saturday I was down to run a 16k. The weather's finally turned and it's starting to be a little cooler and less humid in the mornings so it felt pleasant and comfortable for the first few k. I was running a high 5 min pace and feeling pretty good but kept expecting it to get hard in the second half. It never did. It just continued to feel good, even when I ramped up the pace.

The last k was 5:09 and I was a bundle of emotions - all positive. Happy that my running's finally starting to return. Excited to be getting a little bit faster. Relieved that my health problems are under control. Add in some endorphins and you've got an amazing high. No wonder we runners keep coming back for more.

And it was in this heady mixture of happy hormones and euphoric emotions that I got a little voice in my head. It reminded me of my BAD (big audacious dream) that I'd had in November last year before I started to tank again and before I started treatment. The voice said that I should run Canberra with Bec and Daven.

Bec is just recovering from a nasty bout of plantar fasciitis and Daven fell off his bike and broke himself and both haven't been doing as much running as they normally would leading up to a marathon. The plan is to just run it as best they can. I've been running more than them so I reasoned that if they could, I could. It doesn't matter that I'm a good 20 years older than them and that I've only had a couple of good running weeks.

So I sent a text off to Bec to let her know my hair-brained scheme. And then I sent one to Coach Chris. His response involved words like stupid and crazy and irresponsible. My euphoria had worn off enough for me to recognise that as a possible no. And enough common sense had returned for me to see the wisdom there. I guess that's why we pay him the big bucks - to keep us from doing stuff conceived in a drug-addled state.

So I won't be running the Canberra full. BUT the half is now on my radar. AND I'm trying to convince one of the fruits of my loins to come do it with me. AND I've decided that it'll have to be Melbourne after all. And this time I might take a map of the Entertainment Centre with me so I don't get lost in there looking for a toilet like last time.