I know I've mentioned it once or twice before BUT I'm going to say it again (because it's worth repeating) belonging to a running group is the best thing EVER.

Running groups can do so much for your running. For a start, you become more accountable. It's harder to bail on runs when there are people expecting you. And once you're running consistently there's no way that you don't improve.

You tend to push yourself a little more when you're in a group. Speed work is much more bearable when you've got company and you will almost always work just a little bit harder, push to the end and try to hold your position in the group. This occurrence, which I'll call 'the ego phenomenon' may result in occasional dry heaving but the group respects exercise-induced emesis so it's all good.

Long runs are so much more pleasant when they're done in company. Two or three hours of running by yourself can have you having conversations in your head just to break up the boredom. And we all know that talking to ourselves, even if it's just in our heads, is definitely a sign of impending craziness. Just ask my kids. (Seriously, I never talk to myself. Toby is always around and talking to a dog is eccentric, not crazy.)

Being with a group makes you more accountable on the long run too. You're less likely to walk up that hill, or call a taxi to take you home at the half way mark. It's that ego phenomenon again.

And the people you meet in your running group WILL inspire you. And that's really what this post is about.

Over the last few days a number of the GaleForce Running Squad have been flying out of Brisbane, all with one destination in mind. They're off to Paris to run the marathon next weekend.

Having runners travel to run a marathon isn't that unusual. But this group of ten is made up of four runners who've completed the 42.2k before and six who haven't. Their adventure was concocted over a few drinks (as many adventures are) last year and it's been fun to watch them stretch out their runs, overcome injuries and self-doubt and finally believe that they can do it.

Two of the group have had to overcome stress fractures and a later start to their marathon training. Peter, who's going to become a marathoner at the age of 63, has had ongoing Achilles tendon issues and has had to do a lot of rehab and alternative training. Most of them are in the second half of their life and not one has let it stop them.

Easter Friday morning we all (bar two who had already flown out) met for one last time and one last run. And fittingly we ran from La Dolce Vita - a cafe in Brisbane that has a replica of the Eiffel Tower in front of it. It was so great to breathe in their excitement and hear about their holiday plans. 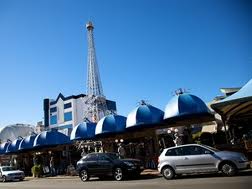 I've just registered for the Melbourne Marathon (yes, I stopped procrastinating) and every time I've thought about doing it I've felt a little flutter of nerves. I get nervous about the training, about travelling, about getting nervous and about failing. But spending time with my inspirational running friends gives me courage. If they can so can I.
Posted by Char at 12:48 AM