Running - The Gift That Keeps On Giving

It's that time of year again - when I start to hyperventilate when I think of work. It's gone from manageable to how-the-hell-am-I-going-to-get-everything-done-and-still-be-able-to-sleep.

I don't like it when it's too quiet either but it seems to be the nature of my business. All frantic hysteria for the first few months of the year and then a slow slide to sloth and indolence which I really quite enjoy. I wish the competition organisers would spread out the comps just so I could get a more even level of work.

On Wednesday I got another big order. On top of the other three that I already have. And it mentally tipped me over the edge. I was feeling stressed and harried - totally convinced that I'd never get the orders done in time. And they have to be done in time or little girls may have nothing to wear at their event.

Wednesday is the day when the whole family eat at my parents place so Wednesday I didn't have to cook (it's such a blessing every week to have that day off) but this week there was a lot of talk about my birthday next week. What did I want? (I don't know) What would we eat? (I don't know) How was I going to celebrate? (I don't think I'll have time)

I left there feeling totally frazzled and flustered and NEEDING to run.

So yesterday I was out of bed just after 4:30am and out the door at 5:00. For the first time in days it was dry. Except for the oval that I have to run through at the beginning and the end - that was a total quagmire. There was no beautiful sunrise, just a gradual lightening making silhouettes more distinct and distant objects turn from men back into signs. The river was high and muddy (we've had a LOT of rain) but it was flat and calm.

I ran into the city and around the Botanical Gardens and left all the work behind me. All the stress and anxiety just dropped away. It was like having a mini-holiday. 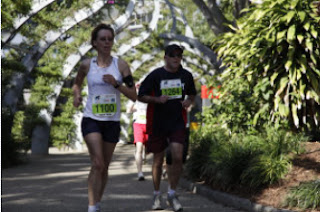 As usual, as I ran I solved all the world's problems. And most of the answers involved some form of running. How do we solve the North Korean nuclear threat? Put Kim Jong Un on a running program. I'm sure he'd lose that petulant aggression (to say nothing of the puppy fat) if he was running 50k a week. Gang violence? Running of course. And the gangs would have a different arena to show their superiority - a running track. Childhood obesity? Doh, that's a no-brainer.

I even worked out why I end up with a headache every time I run with a cap on (and that's been a lot lately). It had something to do with all the thoughts that crowd my head during the run not being able to be released into the cosmos and making my head swell. It totally made sense around the 12k mark.

Yes, I went a little further than my program dictated yesterday but sometimes the run isn't just to improve times or prepare for a race. Sometimes the run serves a higher purpose - bringing a little dose of sanity into a sometimes crazy life.

And the benefits didn't just stop there. I got through my working day with flying colours. Finished a big cutting job and a costume that had been sitting on my table for nearly a week. Sorted out my plan of attack for the next few days. Rang some clients to come pick up their stuff. And organised my fabric order. The dogs got a walk and the grocery shopping got done. And I slept like a log when my head hit the pillow.

And this is why I will keep running until my body no longer lets me.