I don't know if it's traditional around where you live, but in Australia (except in South Australia because of antiquated trading laws) there's a little thing that happens the day after Christmas - the Boxing Day sales. It's for all of those who thought they hadn't shopped quite enough before Christmas or wanted to pick up a few extra things for themselves or even wanted to start on next year's Christmas list.

I am not a regular attendee at this ritual of materialistic gluttony. The crowds freak me out and there's usually nothing that I can think of to buy. But I do have to make at least one trip during the post-Christmas week to exchange gifts. This is a chore that I despise. It makes me feel like a nasty, ungrateful bi*@h but there's something I hate even worse than exchanging gifts - waste.

This year I had three things that I had to take back - two singlets and a book. The singlets had to go back because they didn't fit and the book went back because it wasn't something that I'd read. I'd hinted a few times to Iven about a book that I had really wanted. I'd refrained from buying it in the weeks leading up to Christmas because I was sure he'd gotten the hint. But Christmas came and went without the book so I knew what I'd be swapping the other book for.

So after the first day of the sales was over I braved the shopping centre. It was actually really quiet - no queues. I went to the book shop and exchanged books (and bought an extra because this is the one area in my life, apart from running, that I don't deny myself).

That evening I was telling Iven about my day and what I'd exchanged the book for and he looked very quizzical.

'Which book did you get' he demanded to know.

'The new Evanovich book. You know, the one I pointed out to you in the shops'

'But I gave you that for Christmas' He was really confused now. And he wasn't the only one.

'No you didn't. I got one book and that's the one I returned.'

He rushed out of the room and went into his wardrobe, fossicked around for a while and returned with ...

... the same Janet Evanovich book that he'd bought and wrapped and FORGOTTEN TO GIVE ME. 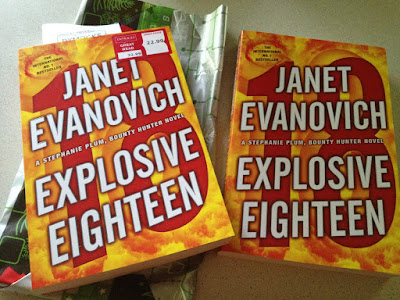 Doh!! Now I have to go back to the book store. I think the ladies there are going to enjoy this story.

And on a running note - I've had another good running week despite it being Christmas week. 10k on Christmas Day, 13k yesterday and a monster hour and a half speed session on Tuesday. I'll wrap it up with a 12k tomorrow. We're still not doing anything really long yet.

Tuesday's speed session was one of the toughest I've done. It was a public holiday so Coach Chris took the opportunity to have a longer set. We did a ladder - 400m, 800m, 1200m, 1600, 2k, then working down again. And on top of longer reps we had one of our hottest mornings - 26C apparent temperature, with a humidity of 92%. It was not a morning for super-fast running - just surviving. And I did. Just!!

I've also done my two sessions of strength work and I swear my drop jumps are getting better. These exercises involve dropping off a height and immediately doing a standing long jump. I drop from the coffee table (thank goodness it's sturdy) and I'm now getting a third of the way along the piano instead of just the beginning. I'm jumping at least an octave further! Chopin would have been so proud of me.
Posted by Char at 1:15 PM