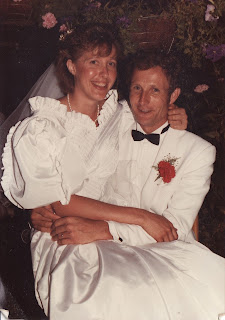 If you've guessed the 80s, you'd be right. Look at the beautiful big puffy sleeves and the pretty taffeta. And the white suit. (That's a dead giveaway.) And the amount of hair that Iven still has on his head.

It was 26 years ago yesterday. As I wrote on Facebook, 26 years and we haven't killed each other yet - it must be love! Time flies when you're having fun and paying off a mortgage and raising kids.

So we celebrated by going to the movies (boy, do we know how to live it up). We saw The Descendants which is probably not the best all-time anniversary movie. It deals with switching off life-support, infidelity and other heavy issues and it had Iven sniffing just half an hour into it. He's such a softy! I, however, only cry when there are deep advertisements like the Gold Lotto ad or when someone's dog dies or if the team finally wins the championship against all odds.

But I'm not going to harp on about eternal love and happily ever after when there are real-life issues to be dealt with. I have an interim plan! Having an exercise physiologist for a son can be a real bonus for a runner. I would definitely recommend that all you mothers out there encourage your children into runner-friendly professions like EP, Sports Medicine, Massage Therapy or Physiotherapy. The fact that Sam is now studying to be a Physio is an added bonus. (And having to volunteer to help him with his massage pracs - well it's only what any good mother would do, isn't it?!)

His take on my current 'injury' (I'm going with injury because it's a lot less complicated to explain to people who haven't spent hours on-line educating themselves on overtraining syndrome) is that I am allowed to exercise but it has to be at a very low intensity. None of this getting your heart rate up to that 180 region. Low and slow is the motto until I see the sports med doctor. I can do my yoga. I can walk. And I can even do my strength training but less reps and more rest between exercises. And all his recommendations gel with what I've read on line.

My biggest issue with NOT being able to run is NOT having that social time a few times a week. But there's nothing to stop me from heading over to the speed session on Tuesdays and walking while they're running. And this will mean that no one will have their birthday missed. So I'm happy that I've got a little bit of direction.

I actually did do my yoga yesterday before I had Sam's permission. And this time I managed to get most of it done without distractions. It was only the last 4 poses that I had company for. Josh sat down on the couch with his breakfast and watched me complete the session. And he did it without laughing. At one stage he sneezed and apologised for sneezing on me. I hadn't felt a thing so I told him he'd missed. But when I'd finished and was rolling up my towel I found a blob of peanut butter. The towel had been under me when he'd sneezed so I'm incredibly impressed with his accuracy.
Posted by Char at 5:39 PM