I want to yell, scream and shout, kick my heels on the floor in frustration and throw a major tantrum. Ever since I had my ultrasound I've been really struggling with my running. I had to walk after 11k on my Saturday long run and even though we were only travelling at 6 min/k my heart rate was over 170. Today's speed session had my heart rate up that high just in the warm up. The session was mile reps and I managed a whole one and it was awful. Six minute pace and a heart rate of up to 183. I stopped after the one rep - it was pretty pointless continuing and just felt sick. Didn't know if I was going to throw up, have diarrhoea or faint.

So today I'm calling a sports med doctor. I won't be going back to the one I saw last year - wasn't totally happy with him. I've been recommended one by three different sources so I'm hoping he has time to fit me in in the not-to-distant future. I need answers and I need a plan. I'm not ready to be a walker yet!

Anyway, that's enough for the whining portion of today's post. I've been baking again. My sister and Mum found me the most amazing cupcake cookbook and I've been inspired. I've also had a few birthdays at the squad. One of the girls has Coeliac's Disease so the challenge was to make a gluten-free cake. I'd just seen a recipe, chocolate and lime flourless cake, so Jenni got to be my guinea pig. I'm not sure that I got the timing right, getting it out of the oven - it sank a bit. But a little extra icing can hide a multitude of sins. 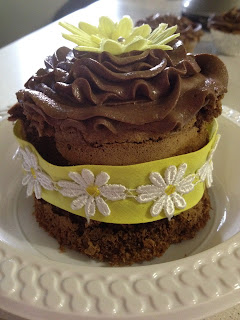 Then the weekend came and the lure of the new cookbook was too great. Cookie dough cupcakes anyone? It was a three step recipe. First make the cookie dough (mmm, choc chip). Then make the cakes and let them cool. Then gouge a hole in the cakes and fill them with cookie dough and then make and pipe on the icing. The icing was something really different - it had flour and salt in it and, yes, it did taste a bit like cookie dough. 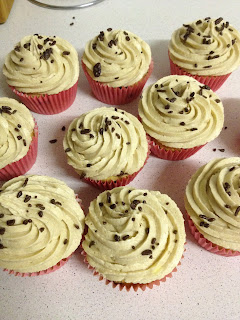 Then finally, I needed another couple of birthday cakes for today's session. I was feeling a little lazy so I went with my usual caramel mud recipe. But it was the decorations that really made the cake. A little tower of Ferrero Rocher chocolates and a drizzle of chocolate. 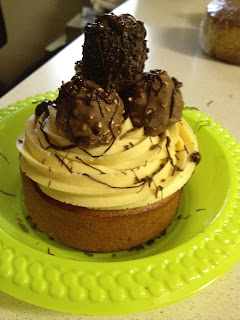 Drizzling the chocolate can be a messy business so it's just as well I always have some willing helpers to help with the cleaning up. 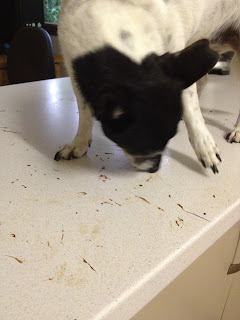 Has anyone else had issues with overtraining syndrome? I'd love to hear other people's stories!
Posted by Char at 1:54 PM