No Running But Lots Of Progress

Okay, let's start with the weather. Blech! We're talking sauna conditions here. I had been lulled into thinking we were going to have such a mild Summer and bam, it hits with a fury. Last night it didn't go below 24.6C/76F. And it had a 'feels like' temp of 29.8/85.6 which makes for a very uncomfortable night's sleep. I did NOT run this morning. After bonking on Saturday's run it would have been beyond stupid. And it's better to have and extra couple of days off now than to have to have weeks off to recover. I've learnt the hard way.

Yesterday was the start of the working year for Josh. For new readers to my blog, Josh is my middle son, who's had some issues with depression since breaking up with his girlfriend. He managed to complete his degree, although it was tough at times, and get his bachelor in electrical engineering (with honours - I'm a proud Mum) and last year started a job in embedded software engineering (don't worry if you don't know what that is - I'm not 100% sure myself) 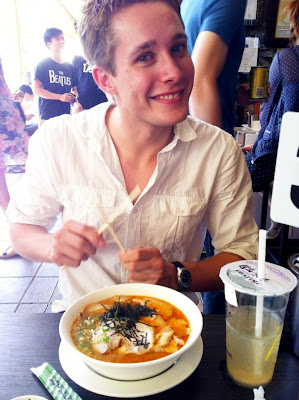 It's been tough for him because he's lost any sense of self-esteem that he had and he's really tough on his performance. But his employers seem to like him because they made him permanent after a six month trial. But he still lacks a lot of confidence and I was a little worried about how he was going to be going back to work. I shouldn't have been. He's implementing all the things we've been working on in the last year and I'm so proud of him.

We've talked long and hard about management strategies of different situations. His biggest issue is letting little annoyances go and not mull over them for the rest of the day. I shared with him the things that I use to cope when I'm feeling a bit down - running, socialising, music (singing loudly and badly along to my favourites), blogging and baking. I've tried to embed things in my week so they just happen without having to make any effort - having breakfast with a friend on Tuesday, walking with another on Saturday, at least two group running sessions a week - all of these are so important to keep me sane.

Thursday he had a bad day. He couldn't say exactly why he felt bad - he just did. So instead of just sitting mulling and listening to heavy music in his room, he rang up a friend and got them over to watch movies together. And it really helped.

Yesterday, his first at work, he got up early and worked out what he needed to do for the day so he could get into work and not feel overwhelmed. Then during the day he contacted a friend and organised a run for the evening which turned into a run and a swim and a bit of socialising. I'm so excited to see him taking responsibility for his emotions and learning to deal with them effectively and positively.

I'll leave you with a little video of what we were doing last night to entertain ourselves.

I'm trying to convince myself that this is totally normal and most families conduct experiments on willing but hapless parents in the guise of the furtherance of their education. But all I can think of is that Sam would work well in certain branches of the CIA.