My First Ever Product Review.

Thank goodness our little heat wave has past. I've been positively floored by the heat and haven't done much at all - especially not much running. In fact, I've done absolutely no running this week. I'm not training for anything. I haven't had much sleep. And I'm not stupid enough to go out when the weather is so vile. One of my squad friends went out for a little 10k run this week and managed to lose 5kilos in the process. This is not running weather.

So what have I been doing instead? Sleeping in seemed like it would be the obvious answer but it's been so hot that there's not much sleeping happening at either end of the day. Staying at the air-conditioned shops much longer than is necessary. Eating water ice blocks to keep cool. NOT baking (who wants the kitchen 4 degrees hotter than hell?) Watching lots of tennis (because that's as good as exercising yourself, isn't it?). And yesterday when the temperature maxed out, I totally played chicken and went to the movies.

But I haven't been totally slothful. I've managed two yoga sessions and a strength session. Yay me! And even if I haven't actually run a step, I've thought a lot about it and in particular I've been thinking about great running products and wanting to do a review on one. This particular product was introduced to me by my son Josh. In fact it was invented by him and I think there is some genius on display here. He's come up with a new and unique way of managing those pesky earplug cords for your portable music. It's the Nipple Ring. 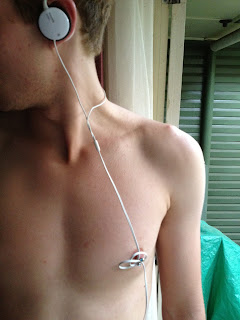 Personally, I haven't actually used this product but Josh reports that it's effective and safe. For the female of the species I think that he'll have to sort out a few issues as topless running is not particularly safe in terms of sun protection, boob saggage and for local car traffic. But I could come up with a line of running tops with a conveniently placed hole and Josh and I could go into business together. (Donald Trump you'd better watch yourself)

I can also foresee that there may be issues for those of you who live in colder climes. But if we can somehow manage to electrify the cord it would keep those nipples toasty warm and prevent frostbite and nipple droppage.

The other problem it may have would be on trail runs. Running too close to extended branches could result in a snag and a potentially nasty injury but in all cases it's a matter of Caveat Emptor (probably the only Latin I know and I learnt it off the Brady Bunch) - let the buyer beware.

So what do you think - genius? How long till we can both retire?