More on Overtraining and Cupcakes.


The reality of not being able to run is starting to set in. Saturday just doesn't feel like a Saturday without a few hours of hot, sweaty socializing with your running peeps. (I think I've been watching too much TV - peeps? seriously?!!) I slept in till 7 am. But luckily we were having a running breakfast so I could get my GaleForce fix for the weekend. Thank you Paul for having a birthday and leaving the country. (I'm not thanking you for leaving the country I'm thanking you for giving us a reason to celebrate. But really, celebrate is probably the wrong word too - we will miss you. And I'll stop now before I put a third foot into my mouth.)

What is a runner when she can't run?? A ner?! That's only half a description and it makes me feel like only half the person I usually am. I wore one of my squad singlets when I went for a walk the other day and felt like a fraud so I've been compelled to make temporary alterations. 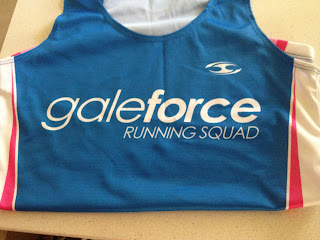 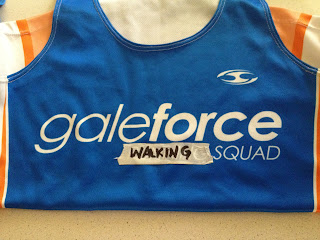 They're temporary because I know I'll be running again - just don't know when. I tried doing my strength session yesterday but it's probably a little soon because it left me on the couch for the rest of the afternoon. (Thank goodness that the tennis is on and I'm still on holidays and I've got a good book to read)

For all who don't know Overtraining Syndrome happens when you place your body under constant high levels of stress for a long period of time. It doesn't have to just be training stress. It can be work stress and relationship stress. And the stressors are cumulative. If you're training hard plus have stress in other areas of your life then you're in the danger zone. I've had some major life stressors in the last 4 or 5 years - one is resolved only to have its place taken by another. And I'll admit to using running as a coping mechanism. My first bout of overtraining syndrome happened three years ago and I've been walking along the precipice of it on occasions since.

My symptoms are worsening performance in training, poor sleeping patterns, digestive problems, nausea after training which will last for the rest of the day, a high heart rate and grinding fatigue. But I know for each person the symptoms can be different. The last time this happened I didn't take much time out but I was very careful not to push too hard once I started running after two weeks off - short distances run really slowly with my heart rate kept at a very low rate. This time I am going to take off as much time as I need. I'm expecting it to be up to 8 weeks but I haven't talked to the doctor yet so that number's a little ethereal.

But enough about me. Let's talk about cupcakes! My new cupcake book is still providing me with inspiration. But some of the cakes can cause quite surprising reactions. 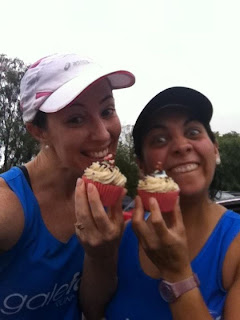 I tried another recipe yesterday (because of Paul's birthday/going away celebration/man -we're-going-to-miss-your-happy-smiley-face breakfast) Everyone gets to be a guinea pig so I can test out these new recipes. I made the Chocolate Fudge Brownie cupcake and used a chocolate cream cheese frosting. The frosting was so delicious that I'm going to post it here.

Ingredients - 60g butter (room temp)
225g cream cheese (room temp)
85g melted chocolate
pinch of salt
3 1/2C icing sugar
1 tsp vanilla
Method  -  Make sure you melt the chocolate first so it can cool. I melted it for 1 min in the microwave. Beat up the butter and cream cheese in an electric mixer until well combined. Add in the melted chocolate, vanilla and salt and mix well. Then add the icing (confectioners) sugar in batches and mix well.

It was so delicious that I had to have a little out of the piping bag once I'd finished icing the cakes. And then a little turned out to be a lot. And then I felt sick. When will I learn!!! 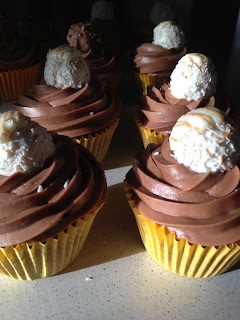 What is your downfall food - you know the one that you find it hard to stop at a reasonable sized portion??
Posted by Char at 6:13 PM