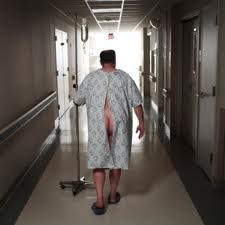 Did anyone hear that? About an hour ago. The huge sigh of relief. And then another one about fifteen minutes later. I survived!! (and I didn't wet myself)

Before I actually start, can I please warn all readers that this post comes with a TMI rating. It delves into the parts of a female anatomy that can make a man squirm - either with discomfort or delight, depending on the circumstances. I have a scientific background and can broach these subjects with the clinical mind of a scientist. And I will be using scientific terms so stop me if you need clarification. (We all know what a uterus is, right? And a hoo-ha, which is sometimes known as a va jay jay) Children please leave the room now.

I woke this morning with a cold feeling of dread. Today was the day when there was great potential for public humiliation. Today was the day I was having my ultrasound. Last week my GP had decided that the pain in my pelvis that I'd casually mentioned at the end of my appointment, warranted further investigation. She was thinking ovarian cancer. I was thinking lactose intolerance causing a mighty build-up of flatus (see I said I'd use scientific terms). Turns out we were both wrong.

My instructions were to drink a litre of water an hour before the appointment after emptying my bladder and then holding on for dear life. As I explained yesterday, I've had three kids in the natural manner and some muscles aren't quite as efficient as they used to be. So I personally thought the fluid volume was a tad excessive and the length of holding time ridiculous. SO, in the interest of full disclosure, I CHEATED. I only drank 600ml. I drank it 40 mins before the appointment and I peed after drinking my first glass. But they don't know my bladder like I know my bladder and I was quite confident that it would be full in time.

I turned up at the appointment early and then sat waiting to be called and for that slightly uncomfortable feeling below. The receptionist asked me if I'd been drinking my water. I could happily say yes but I'm glad she didn't ask how much, when and if I'd been to the bathroom - I'm not a great liar.

They were running on time. Yay! But my bladder hadn't really filled much. Boo! And when the sonographer asked if my bladder was full I felt a little guilty. BUT it turned out to be full enough. Yay!!

The first thing he asked once we got going was how long had I had the fibroids? Fibroids?!! What fibroids?!! The last time I'd had an ultrasound on my pelvis was when I'd been pregnant with Luke so my best guess was somewhere between 1 and 18 years. Apparently my uterus is full of them. Some of them are impressively large. Yay me! But they were so impressively large that they were getting in the way of seeing the right ovary and that's why we were all here.

So I was offered a much more effective way of visualising the area - a trans-vaginal ultrasound. Again yay, lucky me. But this works best with a totally empty bladder and that's when you would have heard the first big sigh.

After getting back from the loo there was another person in the room - goody, I get an audience. I had had to change into a fetching black paper gown with a saucy back split so I was looking my most glamorous best. The sonographer explained the procedure and told me he'd be keeping his eyes on the screen and not watching my face. What for? Signs that I was enjoying myself? But he went on to say that it might get uncomfortable or painful and he wouldn't be able to tell unless I told him. And all I could think was that if it hurt he had to be doing it wrong (and I managed to keep my filter on here, Amanda, and not actually verbalise it).

It didn't hurt and I got to see my fibrotic uterus as the star attraction on the big screen. My right ovary was nice and normal. My left ovary was a little shy but we managed to find that slippery sucker and it too was normal. So we can say that generally there is nothing to worry about. Cue second big sigh.

Of course I had to google fibroids once I got home. I am nothing if not curious. Up to 50% of women my age will have fibroids and mostly they don't cause an issue. The pain I'm feeling (actually it's more discomfort than real pain) is likely to be that one of the fibroid's blood supply has been cut off and a part of the fibroid is necrosing. It's likely to go on for a couple of weeks and than disappear. So it's all good!!

And how did I deal with the stress pre-procedure? I put on my Yoga DVD and worked out. And it was really effective. It had me focused and relaxed and occupied when I would normally have been getting myself worked up. Another big Yay!!

Has anyone else undergone an embarrassing medical procedure? And how do you cope with the stress of anticipation?
Posted by Char at 5:48 PM