I'd really like to set the record straight today. I am NOT a total bitch to my husband. I can actually treat him quite nicely when he's been a good boy. And he generally doesn't read my blog but I do make a point of reading out the ones that feature him heavily so he knows what the rest of the world knows about himself (from my perspective).

I was heavily influenced by my grandmother in regards to marital relationships. She had a philosophy that was quoted so often that it became embedded deep in my DNA - "Treat 'em mean and keep 'em keen". I can't tell you how often I heard that as I was growing up and it's become my mantra. I should make a cross-stitch of it, frame it and hang it over our bed. But Iven and I have been married for 26 years so it must be working on some level.

Today I was back at training after having last week off because of the rain. And today I got to include run breaks into my walk. And today those run breaks added up to almost 1k (in a 5k route). And today I haven't had any nasty after effects from my exertions. No headache. No nausea. So today I'm feeling really positive. But I'm not going to push it. My plan for this week is to walk (no running) again on Thursday. Walk/run on Saturday with the group (for 500m until I drop off the back). Then walk on Sunday. I'm on the comeback trail. 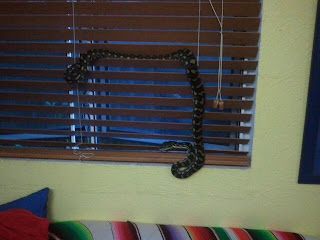 The picture is in Sam's bedroom and this what he woke up to. That's one way of getting your kids up and going in the morning. None of that hitting the snooze button for a few extra zzz's. I think it may have been the snake that Sam chased from the hen house a month ago and I think this snake has a very long memory. They say revenge is a dish best served cold - well this snake believes that it's a dish served by cold-blooded animals.

I had to go down into his room today and I have to say that my heart rate was a little higher than normal. I kept looking for movement out of the corner of my eye. I have no idea how he slept down there last night.

Off to have a little pre-work nap. I'm just following doctor's orders!!
Posted by Char at 3:56 PM