The Good, The Bad and The New Bedroom Decor

Let's start with the good news. I'm starting to feel a lot better. I'm getting through my work days without wanting to curl up in a little ball on the workroom floor, have a cry and then a half hour nap. AND I'm working longer days - not because I want to, but because it's that time of the year. I'm not having to lie down as soon as  I get upstairs after work just to gather enough strength to get through the evening. And I'm not feeling nauseated for the first six hours of the day. So that's all a big plus.

I've been a very good or lazy girl this week - depending on what camp you're sitting in. The hard-core fitness nuts will be on the side of lazy. But the conservatives who like the idea of me following doctor's instructions will say I've been good. I've walked only twice this week, not my usual four times and done my yoga DVD twice. Honestly I wasn't intending to walk only twice but the weather hasn't been so kind. We've had a few days of rain and I'd decided (in consultation with Bubbles) that walking in the rain wasn't sensible when you've been sick.

So now it's time to get onto the bad news. I've done something to my back. Wednesday it had me up in the middle of the night but felt better in the morning. That night it was back (no pun intended) and I had more Nurofen to help me sleep. Thursday it was sore all day and Friday I succumbed to the lure of a shopping centre massage to try to get the kinks out. More Nurofen, stretching, heat packs hasn't helped much and tomorrow morning I'll be ringing my physio, Chris to see if she can squeeze me in. I kinda think it's because I've been so inactive - like rigor mortis has sensed that my body is failing me and is starting to move in before the corpse is cold.

But even all this annoying pain has had its up side. Iven's been so kind and considerate and helpful. He's had to really step up with the meal preparation. Seeing me in pain bothers him ( he's so nice - seeing him in pain makes me offer to give him a quick injection to put him out of my misery). He's bought me hot packs, made me cups of tea, given me a back massage that resulted in bruising and another that didn't.

But the best thing that's come of all this is that I've been able to redecorate our bedroom without having to argue with him to get my way (and I like to get my way when it comes to interior decorating). Friday morning I found a hole in our doona cover, thanks to Bubbles. It was a really old cover and we'd already looked for a replacement without success but I had to look a little more seriously this time. So Saturday found us at the shops. I'd already decided which one I'd wanted the day before when I'd had a quick reconnaissance mission but, in the interest of LETTING him think he had a say in the matter, I took him back to get his approval. He liked it BUT he quite liked the navy one more and carried it around the shop like a kid who'd found the stuffed toy of his dreams and couldn't live without it. 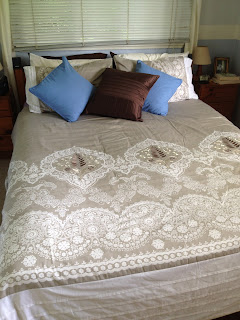 It didn't take much, though, to get him to let me have my way. A few grimaces of pain, a bit of self-massage of my neck and shoulders, a few sighing breaths and he was putty in my hands. I swear I wasn't putting it on!  But I may remember this incident next time I really want my own way on an important issue. In fact - it may just be the best time ever to plan that overseas trip.

And I did finally get to the movies - Friday night. And I got a meal as well. The old man CAN step up when he really tries.
Posted by Char at 7:00 PM