I Just Read Them For The Articles 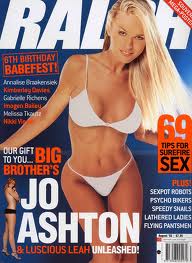 Some days it's like the universe is bent on teaching you a lesson. Today I learnt a fascinating one.

Bubbles and I were out on our walk, which ended up being a run/walk because we were just feeling that good, when I saw the most puzzling piece of litter on the ground. It was a page from one of THOSE magazines. The sort of magazines that are often at the back of the newsagency where the sleazy men hang out. You know the type - the ones who move off quickly when you go into the wrong aisle looking for your running magazine and pretend that they've been looking at the car magazines all along while surreptitiously trying to sneak a peak down your cleavage.

Anyway, this page had the picture of a girl with the most enormous, naked, unfettered breasts that I've ever seen in my life. Now, I come from a house of big-breasted women. In fact I used to BE a big-breasted woman (hello double D) but breast-feeding and running has streamlined these puppies into a much more manageable size. My youngest sister, when she was pregnant was positively distraught when her E (for enormous) boobs became an F (for f@*#ing enormous). Well the breasts made my sister's look quite pitiful really.

But it wasn't the breasts that puzzled me so much - although I did wonder if they were real and if they were, why hadn't she had a reduction and if they weren't, why had she chosen to be so freakishly large. It was actually the headline that made me wonder. Emblazoned across her breasts were the words - My Breasts Saved My Life.

Those words got my neurons firing for the rest of the walk. How had her breasts saved her life? Had she fallen overboard on the high seas and her breasts had acted as a flotation device? Had they then become beacons to the rescue helicopter?  Had she been forced to jump from the fourth floor of  a building and her breasts had cushioned her fall? Had she been shot at or stabbed by a mugger and the bullet or knife been stopped short by her industrial-sized (and possibly filled with industrial-strength French) silicon implant?

I really wished I'd stopped and tucked it into the dog-poo pouch that's on Bubble's lead so I could have read it quietly in the locked toilet when I got home. (Isn't that where men have found it best to read such literature?) I will never know the answer to the question. BUT I have learned that maybe men DO read THOSE kinds of magazines for the articles.
Posted by Char at 5:48 PM