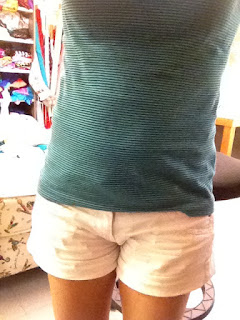 Once I had put them on my mood changed. I'd been happy when I got up. I'd felt pretty good so Bubbles and I laced on our walking shoes (that in a previous life were running shoes) and set out on a leisurely 7k. I came home a little tired but okay. I had my breakfast still feeling quite happy. Then I had my shower and put on those shorts and something switched. It could have had something to do with Iven not remembering that we'd planned to go to the movies and he'd decided to fill his day with something different that involved NO FUN WHATSOEVER FOR ME. But I'm blaming the pants. I've since washed them and hung them out in the sun to improve their disposition so I'm hoping they will behave themselves next time I wear them.

So how did I spend my Sunday instead of going to see my other celebrity free pass at the movies? First I'll explain the idea of the celebrity free pass. It is the celebrity who you quite fancy and who you get a free pass from your marriage to spend a little 'quality' time with (assuming that they find you as irresistible as you find them - which of course they would). The celebrity with my top billing is Hugh Jackman (being an Aussie and a nice guy and having a thing for older women helped put him on top). But I've always been a little partial to Liam Neeson. I think it's the accent. And he was starring in the movie that Iven FORGOT we were going to see. (and I have not yet forgotten that he forgot - I'm a little like an elephant that way)  So I got to spend the day WORKING. No wonder I had my cranky pants on. I spent four less-than-blissful hours cutting out bikinis for body builders. I'd have rather gone to the movies.

I'm not a very good patient. I think it's because I'm lacking the patient gene. You'd have thought that having three kids would have given me the patience of a saint - but not so. My theme song at the moment is Anastacia's Sick and Tired. Yep, I'm sick and tired of always feeling sick and tired. Maybe she had Glandular Fever too. Or maybe she was just singing about a bad relationship.

Thank goodness I have friends who give me their time to have breakfast with and let me vent to. And, funnily, when I'm with them there doesn't seem to be so strong a need to vent. They give me a little dose of sanity and perspective. Maybe I should change my theme song to Barbra Streisand's People and change the lyrics just slightly to 'People who have people are the luckiest people in the world.'