The Problem With Easter

I have a MAJOR problem. No, it's not another cranky customer. And no, nothing's changed with my health. The wedding is over so I have nothing to worry about on the sartorial side. My problem is much more basic and not an uncommon problem within the fairer sex. My problem is chocolate!! 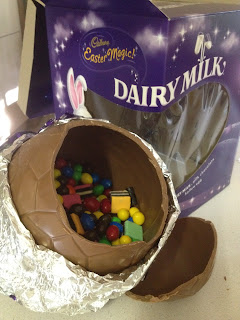 Now that's a 700g egg. It's the biggest egg that I've ever been given. But I also got a packet (a large packet) of licorice allsorts and three packets of almond M&Ms (my current favourites). Add to that the left-over chocolate from my birthday and you've got enough sugar to put me in a week-long diabetic coma.

I may also have mentioned a little problem that I have with lactose. Lactose + not enough lactase (digestive enzyme) = stomach pains and flatulence. Milk chocolate has lactose in it. Licorice is a well-known laxative. Combine the two and you have a potential incendiary device that could wipe out a city with one open flame.

I'm rationing myself but every night I end up with a little stomach ache. I could give some away but I just can't bring myself to part with any of this delicious, wind-creating goodness. It's a huge dilemma.

And on top of this is the guilt that the Easter Bunny wasn't quite as generous to Iven. Yes, I'm stingy. So my guilt-ridden self was forced into a chocolate shop yesterday to buy Iven a second of his favourite ginger chocolate egg (at 25% off). And while I was there I managed to buy myself a licorice chocolate egg. I have no idea how that happened. I must have been in a sugar-induced psychosis. And then I came home and hid it - from myself. Luckily for early-onset dementia. I might forget where I hid it in the next couple of days and then find it at Christmas.

For Easter I also baked a special Easter batch of cupcakes. They weren't a new recipe - I just decorated them in an Easter theme. 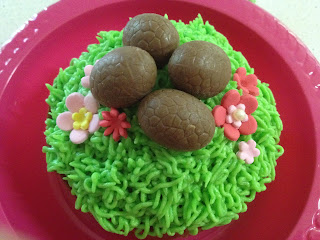 I love my new grass piping nozzle. But squeezing all that icing (48 mini cupcakes and one 4 inch cake) through the little tiny holes can give you a serious case of Popeye forearm. It's my first-ever bout of cake-decorating DOMS. 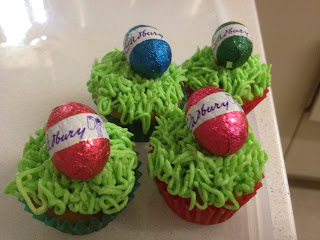 Did anyone else end up with way too much chocolate? Please let me know that I'm not the greediest little piglet.
Posted by Char at 5:22 PM