Thursday it finally happened. My beautiful, old Nelson couldn't get up and down the stairs any more. His hips had passed the point of no return and even standing was a huge struggle. After he'd collapsed for the umpteenth time, I did what I had to do. I called Iven in tears and told him that it was time. Actually, I really didn't say much for the first little bit - I just couldn't get anything intelligible to come out of my mouth. He said he'd deal with it when he got home. Sometimes it's really nice to use the 'emotional female' card - especially when you are.

It was the longest afternoon. I kept bursting into tears. Luke was home and it was really tough on him. I found him lying in the hallway with Nelly just stroking his ears and cuddling him and that set me off again. My BFF texted wishing me a happy day and I had to text her to say that it wasn't so happy. And then she rang to have a conversation with a sobbing woman. I have mentioned that I'm not a crier haven't I?! There are some exceptions.

I had intended to bake but just couldn't do it. Baking is supposed to be done when I'm in my happy place. I'm sure that if I'd baked on Thursday my tears would have made it bitter regardless of how much sugar went in.

Iven came home at 3:30 and rang the vet. He was holding it together so well. He took Nel down to the car and I wished him a final goodbye. I just couldn't go. Fifteen minutes later Iven was home again in tears. It's just so hard to say goodbye to a family member who you've loved so much.

I pulled myself together a bit and cleaned. I polished and vacuumed and scrubbed. It helped a bit and no one can hear you crying over the noise of the vacuum. Then Luke's girlfriend Becky turned up. Having her there was wonderful. We could talk and laugh and cry if we had to but as the evening wore on the tears became less.

At 8:30 there was a tap on our glass door. My BFF had driven all the way from the coast (an hour away) to give me flowers and food and a big hug. Her kindness was humbling. I am so blessed to have such a wonderful friend.

Eventually the awful day was over and I managed to get a good night's sleep. When I woke up my first thought was to do the baking that I'd wanted to get done the day before. But when I'd scraped the mixture into the cake tin I went to put it on the floor for my bowl-licker and that heavy empty feeling came back again. I managed to hold it all together, though.

I've had a few dogs in the past and it's always been the same when they go. And I've found that the only way to fill that doggy-shaped hole that's left in your heart is to get another one. So Friday I was a woman on a mission. I scoured web-sites and made a few phone calls. And this morning we went puppy shopping.

Meet the first aid kit for my heart. 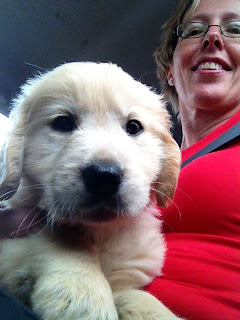 We went to a pet shop (I know - I should go to a reputable breeder but I couldn't find any that had puppies and this pet shop is run by a vet). They had three little boys but when we walked in we could only see two. The third was in another cage behind the first two and his sister had just been sold a little earlier. It was love at first sight. I was allowed to hold him and he just snuggled in and I knew that I couldn't let him go. Luke was in total agreement with me and Iven was happy to let us make the decision.

When I finally got him in the car I sent that pic to Josh who rang me back instantly. I suggested that he might like to start thinking of names. It took him a millisecond to come up with Tobias. It fit - Toby it is!

Did you know that puppies have a strong gravitational pull? We keep being drawn to him and can't seem to leave the room that he's in. It took me two hours to make a batch of cupcakes!! It usually takes 30 minutes including the cleaning up.

And how stupid did we all seem to our neighbours when we took him outside for his first wee and cheered loudly when he performed?! Puppies can make you lose all sense of dignity and decorum. 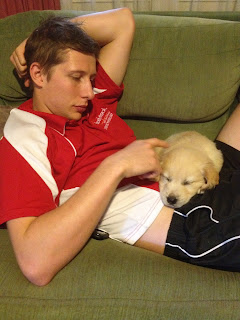 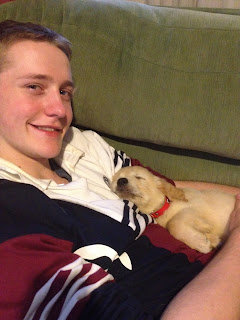 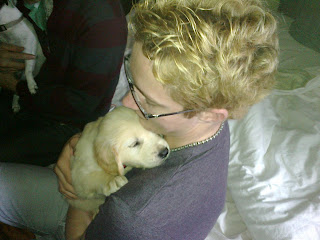 We're still sad about Nellie - that's a given. But Toby has given us a some laughter and lots of smiles. Well all of us except for Bubbles - but he's working on her.

So I must apologise in advance. There will be lots of posts in the near future that are about puppies and are filled with pictures of his total cuteness. I'm sure you won't mind ... too much.

And the baking that I did - Becky's birthday cake. Happy Birthday Becky!!!! 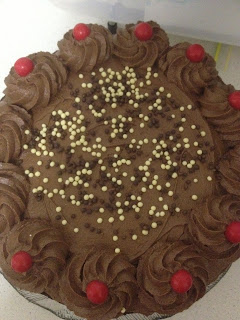